Urban Legends and Their Relation to Ancient Myths 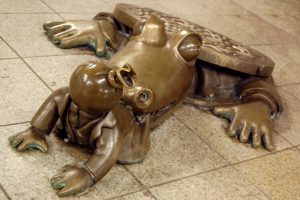 Myths have always been a perfect way for people to explain phenomena they could not understand. The unknown is always more frightening than something you can explain, so inventing clever and intricate stories impersonating the forces of nature, our ancestors managed to soothe their fears. According to this logic, a thunderstorm was not just an impersonal cataclysm, but a manifestation of a deity’s wrath. Seasons change not because the planet is a sphere revolving around a star bolting through endless space, but because a deity of life gets trapped in the underworld (autumn and winter) and then rescued (spring and summer). People get sick because of evil spirits, and nature is full of mystic creatures and spirits.

The examples are numerous, but one common feature uniting them is that such impersonification and animism were a perfect way for ancient people to look at the face of the unknown. Coaxing a samum, rainstorm, or drought on their own is impossible; when there is a deity standing behind threatening phenomena, it can be negotiated with. Rituals and sacrifices were aimed at doing just that: praying to their gods for grace and favor, ancient people could calm their fears and hope for the best.

A pre-scientific way of comprehending and scrutinizing the world around us, myths appeared almost at the dawn of human civilization–but surprisingly, they never disappeared even with the development of technology, science, and multiplication of humanity’s overall knowledge about the world around us. Forms have changed, but the essence remains the same: people still fear a lot of things, and lacking the means to explain their fears, they start creating stories around them. In this regard, it is particularly interesting to take a look at a modern folklore genre known as urban legends, or city legends.

The environment people live in has definitely changed. We now know how to explain lightning and earthquakes; we know what are the stars and how physics works; we are no longer afraid of the dark. However, our minds are trained to feel fear. For thousands of years, fear has been one of the best survival tools at our disposal: an animal that is afraid is always alert, always ready to fight or flight, and thus has better chances to live another day. Instincts do not disappear easily, and the “habit” to be afraid is still strong in many of us. Psychologists would probably call it basic anxiety, or existential terror. The objects it is aimed at have changed, but the essence remains the same.

Urban legends mostly draw their plots and details from popular culture, or are inspired by the overall condition of a society. Some legends reflect the fears of smaller groups of people, whereas others serve as a manifestation of mass consciousness (LiveScience). Many of such stories possess a set of similar characteristics, allowing folklorists to define them as urban legends. For instance, they are extremely difficult–if not impossible–to verify. The absolute majority of such stories start with the FOAF formula: “a friend of a friend.” Such formulation implies the “reality” and even the relative “proximity” of what is being described in the legend, while making it completely impossible to prove or disprove the story. Urban legends are often vague in terms of characters: usually, the main protagonists of such stories are nameless average people, whose function is to trigger a story and illustrate its circumstances. This is rather typical: it does not matter to whom something happens–much more significant is what and how it happens. This allows one to subliminally convey a message that a story could happen to anyone, and lets listeners associate themselves with its characters. Unlike the latter, the circumstances are much more detailed: time of day, location, and objects directly related to the story are often described with precision. Urban legends are mostly scary, although some can contain elements of humor. And, most importantly, urban legends are not completely made-up: some of the stories are based on real events (Marlcliffe Primary School).

Let us take a look at some examples.

We all have at least once received “chain emails of unhappiness.” Usually, it is a letter or an email starting with words like, “This is not a joke! Send this letter to X contacts, or Y will happen.” Usually, we throw them away, or mark them as spam hoping to never receive it again. This is a typical urban legend: a letter whose origins are unknown (presumably, it emerged as a result of autogenesis), and which can have a mystical influence over a receiver’s life. The choice one has is simple: either to continue the chain and pass the letter on, or to break it, risking to suffer from a “curse.” However, what can be frightening about such letters is that some of them can be based on real life. The proof of this is the story of John Edward Robinson, also known as “Slavemaster”–one of the first Internet serial killers who operated in the 1990s in the United States. There were numerous warnings about him online. Chatrooms were full of messages like this (original punctuation and spelling saved):

“If a guy by the name of SLAVEMASTER contacts you do not answer. He has killed 56 women that he has talked to on the internet.

PLEAZE SEND OUT TO ALL THE WOMEN ON YOUR BUDDY LIST . ALSO ASK THEM TO PASS THIS ON.

AND PLEASE SEND THIS TO MEN TO…….JUST IN CASE!

Send to EVERY ONE YOU KNOW!!”

The bodycount of 56 victims was exaggerated, but he is known to have had lured and killed at least five women with the help of the Internet. Also, he is known to had been an active killer in the 1980s (Thought Catalog). Surprisingly or not, but not too many people believed the letter. As we can see, not every urban legend is a myth. This particular case is an example of how a true story–this, or any other similar case before or after Robinson–can supposedly inspire a whole pop-culture phenomena.

A more fantastic urban myth is the one about Slender Man. It is easy to trace its origins: in 2009, a user of the forum titled “Something Awful” posted several images of a malicious-looking creature (The Something Awful Forums). The images were of low quality, but it was possible to see various deformities and recognize the overall distinctive look of Slender Man. There were also captions to the photos that started the whole myth. One of them says:

“One of two recovered photographs from the Stirling City Library blaze. Notable for being taken the day which 14 children vanished and for what is referred to as “The Slender Man”. Deformities cited as film defects by officials. Fire at library occurred one week later. Actual photograph confiscated as evidence. — 1986, photographer: Mary Thomas, missing since June 13th, 1986.”

This legend demonstrates a set of typical urban mythology features as well: it refers to the events that supposedly occurred in reality; it pumps suspense–not clearly stating “this is a monster,” it suggests that the creature in the picture is supernatural; it has precise descriptions of the date and location where everything happened. The concept of Slender Man turned out to be so popular that now the legend has numerous variations, and there are even several video games dedicated to this character.

Perhaps, the very idea of a threatening faceless man with tentacles who lurks in shadows and stalks his prey has something to do with the subconscious fears of people. Speculating on this topic, we may think that Slender Man is a manifestation of a fear typical for big cities, where you never know who can pose a potential danger. Mass shooters, child molesters, kidnappers, serial killers, maniacs–these are real dangers, and the concept of Slender Man might be a reflection of the idea that anyone (facelessness) could be a threat. Of course, it is speculation. Slender Man was created for an online Photoshop contest, but it is not his origins but his popularity and persistence as a myth that make him remarkable.

There are many other urban legends. UFOs, zombies, poltergeists, mysterious killers and unexplained deaths, people vanishing without a trace, disfigured and grotesque characters lurking in the shadows of narrow city backstreets–these are just some of the examples of stories people create nowadays. Some of them are based on reality, while others are completely fictional. But what unites all of them is their mythological nature: despite having been created in an age of technological progress and scientific triumph, they demonstrate that the fear of the unknown is still one of the strongest elements in the human psyche.