Walking From Seattle to Chicago 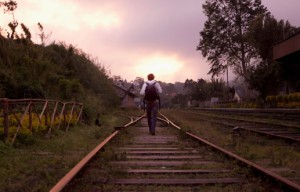 I know what I am doing is illegal, and a bit dangerous. But it has been my dream since childhood to walk from Seattle to Chicago on train tracks. I encountered one man in Seattle before who had come from Chicago by walking on train tracks. Now I am wanting to complete the cycle.

I set off this morning from my apartment in the city of Edmonds at 6:45am, as planned. In Edmonds, there is easy access to train tracks along the Pacific Ocean. It took me a half an hour to walk down to the tracks, fueled by my boiled egg and brown-sugar oatmeal breakfast.

Though my family thought I was a bit nuts to go on this so-called expedition, I don’t blame them. It’s not every day someone tells their parents they are going to go on a long hike across the U.S. But I am a 26-year-old former boy scout with all the necessary equipment to survive my journey. And also, I know the nature of train tracks well: when trains are coming, when there will be no trains for a while, the timing to jump out of the way if a train suddenly appears in my vision, and so on. I have loved trains since I was a baby—my first word was “choo choo” after the sound of a train whistle.

I chose the month of March to begin my walk, as spring in Seattle is not too cold and not too hot. The greenery in Washington state at this time is sometimes hard to describe in its heavenly sight. The rain definitely contributes to making this state lush with greenery and blossoms.

The usual suspects were out this morning: flocks of seagulls surveying the rather calm waters of the Pacific Ocean; murders of crows hanging out in pine trees of douglas fir trees; the scent of tar on the tracks that wears off in your nose after a few hours of walking.

In the first two hours of walking, two trains had come: one cargo and one passenger. I easily picked up on the signals of them coming and leaped to the side into the forest before they could come to crush me.

I wrote a haiku around the third of fourth hour (I don’t have a watch).

Not the best haiku, but at least I am still trying to write them.

I had lunch at around 1pm. Salami, cheddar cheese, and crackers. Simple but tasty. My father used to eat the same on his hikes.

In the late afternoon, I saw a bald eagle swooping over the forest and over the Pacific Ocean as well. It was a majestic sight. I also saw some blue herons in the shallower waters. It made me feel like my journey has an auspicious beginning.

Over the day, some people stared at me, wondering why I was walking on the tracks with a hiking backpack (at least this is what I thought). Sometimes people report walkers on train tracks to police, so I have to be a bit careful.

At night, I was near the start of the city boundaries of Seattle, and decided to set up in a meadow on the left side of the tracks, having the Pacific Ocean no longer there. It seemed symbolic to sleep where the Pacific Ocean once was earlier in the day. I tried to be inconspicuous as possible, setting up my tiny tent in a group of bushes among high grass. It didn’t seem like many people came this way anyways—only to relieve themselves at times.

I heated up a can of tomato soup and accompanied it with bread for dinner. I was so glad to have brought a small camping stove—it’s seems like it will be a lifesaver, as I don’t have loads of cash to go out to restaurants.

Just a note: a saw two other people walking on the tracks today. A couple. There were having a romantic evening walk (a dangerous one at that).

A travelogue is a person's account of a journey to another country or place. It can either be a written report with many factual details or a narrative story about personal imp...