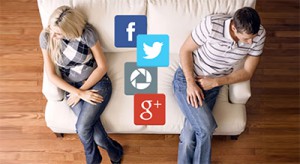 A family has, at most times, been seen as private territory. No matter what happened outside of it—for example, at work or elsewhere—a family, in principle, is where many people can share their problems, seek for solutions together, enjoy understanding and privacy. However, as technologies have become more and more advanced, this private, intimate space has shrunk. Today, in the era of social media, relationships in many families have changed, since social media affects these relationships in a number of unexpected and sometimes negative ways.

Looking from an optimistic perspective, children and parents have gained a powerful tool of communication. Indeed, while communicating in person might be difficult for both teenagers and their parents during the “teenage rioting” period, social networks provide a valuable opportunity for communication. However, there is another side of the coin. About 30% of people are now using all kinds of gadgets, including cell phones, tablets, and so on, to talk to their loved ones through social media services, instead of having a conversation with them in person. One person out of five admitted they learned what their family members were doing by checking their statuses online, not by asking them personally—even though they might be sitting in the next room (Macleighob).

Moreover, a study on media influence done by the Kaiser Family Foundation shows that young people from the age of 8 to 18 years tend to spend about seven hours a day using entertainment media, which makes a total of approximately 50 hours per week. This means that during this time, they are not exercising, hanging out, communicating with their families, or getting involved in intimate relationships. Such a lifestyle makes them gain extra weight, get easily distracted, and develop difficulties in establishing interpersonal relationships, including the relationships with parents, siblings, and other family members. The study suggests such young people often tend to be mentally absent when being with a group of friends or family (Huffington Post).

Yet another problem originating from social media is the real lack of privacy within families. When there is a conflict, fight, regular problem, or even a happy event, one (and sometimes both) of the spouses occasionally post about it on Facebook, or share this information with the public in some other way. This leads to a transparency of relationships, and thus its vulnerability; also, one of the spouses might be frustrated by the fact that intimate details of their family life are being exposed to a large number of unfamiliar people. This leads to additional conflicts, further posting about these conflicts in social media, and thus creates an endless cycle of problems (IFR).

Social media possess many useful features, but in the case of family relationships, these media services should be used with caution. According to different studies, teenagers widely using social media tend to communicate with their family members in person much less often. They may face difficulties connected to social adaptation and acceptance, as well as excessive body weight and communication problems. Also, social media may be used by family members to share the intimate details of family life with public; this can be frustrating for family members.