Writing a Cause and Effect Essay 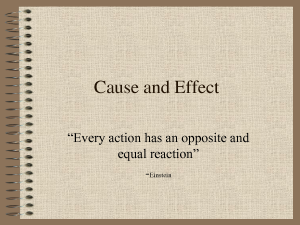 When you write a cause and effect essay, you need to explain how specific conditions or events translate into certain effects. In other words, your task is to show how one thing leads to another. In most cases, you will need to demonstrate how multiple causes result into one effect, or how only one condition becomes the cause of several consequences.

Steps for Writing a Cause and Effect Essay

Cause and Effect Essay Topics

Since almost any event has both its causes and consequences, there are a vast variety of possible topics for a cause and effect essay. Still, it would be reasonable to choose a topic you are familiar with. These may be:

Common Mistakes When Writing a Cause and Effect Essay

– Forgetting to show connections between causes and effects.

– Covering a broad topic and digging into a large number of causes, consequences, and arguments.

– Losing links in a causal chain. If you have a sequence of causes that flow logically one from another, then missing one or several of them will make your paper harder to understand.

– Forgetting to use supporting details.

– Forgetting the purpose of your paper. For instance, starting to write a persuasive paper may end up with an informative one.

Samples for Writing a Cause and Effect Essay

Giving birth to a child is, perhaps, the most significant event in the life of almost any woman. Though today women often prefer to follow a career rather than give b...
The Harry Potter series, written by J.K. Rowling, is perhaps the most popular set of novels of the modern era. With seven books and many blockbuster films to its name, the series has amassed about 15 billion dollars in sales. How did this phenomenon become...
World War I spanned from July, 1914 until November 11, 1918. The War caused the deaths of over 17 million people. However, telling about the causes of the first world war is not so easy. There were a multitude of reasons that the War broke out. The major c...