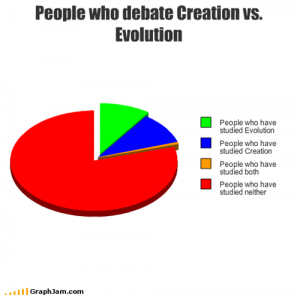 After Sir Charles Darwin introduced his original theory about the origins of species and evolution, humanity’s faith in God, which remained undisputed for hundreds of years, had reeled. The former unity fractured into evolutionists, who believed life as we see it today developed from smaller and more primitive organisms, and creationists, who kept believing life in all its diversity was created by a higher entity. Each side introduced substantial arguments to support their claims, but at the same time, the counter-arguments of each opponent were also credible. Therefore, the debates between the evolutionists and the creationists seem to be far from ending. And though their arguments are completely opposite, they can coexist and even complement each other.

Evolutionists often come with the argument about fossil findings serving as a proof of the evolutionary process; bones of such creatures as dinosaurs, or the remains of even more ancient beings found by archaeologists are much older than the age of our world according to the Bible. Therefore, claim the evolutionists, creationists are wrong. Creationists, however, came up with a strong counter argument. They say all fossil findings are already fully formed, and appear to have not changed much over time; in other words, they remained in a stasis condition (Geological Society of America). This means there are no intermediate links between simpler and more complex life forms, which witnesses in favor of the claim of each species having been created.

Evolutionists—as well as atheists—state, despite the enormous scientific and technological progress, despite ultra-sensitive observation systems, such as orbital telescopes, there are still no factual evidence of God’s existence. At the same time, creationists appeal to the fact that though God has not yet been heard or seen, a multitude of indirect evidence exists of its existence. For example, creationists name an incredible complexity both of living organisms, and the ecosystems they inhabit. The compound eyes of night creatures are extremely difficult to develop, especially on their own. Ecosystems function in such a way that the absence, even of several smallest components, causes the ruin of the environment. It is difficult to believe such complexity and diversity appeared and established balance on its own, whereas evolutionists suggest the idea of random development through survival of the fittest.

Evolutionists believe over time, the matter that formed our universe shaped out into stars, planets, chemicals, and finally, living organisms. According to evolutionists, before the Big Bang, there existed nothing (or at least what could be observed with our laws of physics), but after it, the matter self-organized in ordered structures, which become even more structured and organized as time flowed on. Surprisingly, creationists refer to science to oppose this thesis. They say that, according to the second law of thermodynamics, everything, be it living creatures, chemicals, or substances, tend to blend and mix with their environment over time, finally reaching the steady-state, which does not happen in nature (BestBibleScience.com).

At the same time, both sides seem to forget one point of view that does not necessarily contradict another one. It is possible God could have planned everything, prepared certain elements for the universe’s development, and then just pressed a metaphysical “Start” button, letting its ideas self-embody, watching the results. Or, God could have created the possibility of life, but after this, it could leave this life to find its own ways. Besides these, many other compromise variants can be suggested; anyways, it is ridiculous in the debate about the most complex and incomprehensible subject in the world if only two points of view exist.

The clash between evolutionists and creationists seems to be far from its finale. Both sides come up with potent arguments in favor of their positions. Evolutionists stress the absence of factual evidence in favor of God’s existence, point to fossils as a proof of the evolutionary process, and name the Big Bang as the reason of the universe’s appearance and further development. Creationists, in their turn, stress there are no intermediate links between species in found fossils, consider complexity and diversity of nature to be an indirect evidence of God’s existence, and refer to the second law of thermodynamics to argue against the Big Bang theory. However, none of these sides seem to see how both points of view can not only coexist, but be successfully combined. Such a combination could explain everything at once.