Rene Descartes and the Question of How to Treat Reality 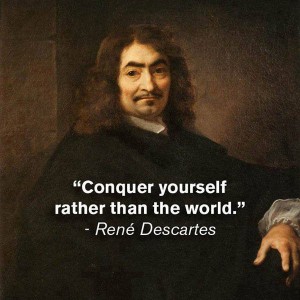 Rene Descartes was particularly famous for attempting to arrive at certain fundamental principles that could be undoubtedly considered as true. The method Descartes chose to approach this challenging task was to question everything and anything. In his Meditations on First Philosophy [Bennett, 2010], Descartes focused on the problem of distinguishing between wakefulness and dreaming. How can we say what reality is if there is the possibility that we are simply dreaming it?

The French philosopher argues that there is no reliable sign to tell when we are dreaming, and when we are in fact experiencing reality. Being deeply religious, the philosopher goes on to suggest that this might be a trick of some “cunning demon” [Blom, 1978] who tries to deceive naive souls by leading to them believe that whatever is around them is real which, in fact, is a false assumption. The question that Descartes raised roughly four hundred years ago has puzzled me and caused me to question whether it is at all rational to doubt everything we perceive through hearing, seeing, touching, tasting, and smelling. To me, such a superfluous discretion is rather unjustified and unreasonable.

We believe what we want to believe. Whenever we try to understand why people join a cult or take part in an extreme fast, emphasis should be placed on desires. Even when we deprive ourselves, we usually do it in an attempt to gain what we desire: a slim figure, a compliment or an admiring look, forgiveness or respect. When we choose to believe or doubt, we do it for a reason that we might not admit to ourselves or others, but there is always a reason. Thus, when we cannot think of a reason not to trust our senses, then why should we doubt it?

It is no secret that what we believe has every chance of becoming true, even if it is not already in our perceived reality. Visualization techniques, psychological training, and gestalt therapy classes that have gained tremendous popularity in the past 20-25 years all teach us to control what we think, to focus on positive thinking, and to demolish those inner borders of our conscience that tell us our dreams are impossible to achieve, our skills are limited, and our opportunities are few. Let us choose to believe the opposite, and not doubt the possibility of us being the masters of our lives, so that no ‘cunning demon’ can distract us with false perceptions and throw us off the right path.

I think it is against the nature of our body and mind to doubt our own senses at every point in time. We were created with the five senses for a reason, whether it was by God, by nature, or some other supernatural force—whatever the theory one wishes to support. It is difficult to doubt the fact that we function the way we function, and perceive the way we perceive. We do not have the smell of a hound, or the sight of an eagle, and we do not hear ultrasound. But, maybe that is because we are not supposed to. Let us admit that there is information that humanity does not know, millions of discoveries are yet to be made, billions of incredible revelations to shock humanity in the years to come, and much more that remains undiscovered by us. Does that make our lives pointless? I do not think so. I choose to believe that what I perceive is true, what I sense is trustworthy, and that no demon except for my own crazy imagination can deceive me with any permanence.

A critical essay provides interpretation and analysis of a set text, piece of music, a painting, or play. It must be written with an academic purpose; it often proposes a sound argument. Although frequently confused with a review, a critical essay is ...
✕
Write with confidence at a college level