The Theme of Deviance in “Borderlands/La Frontera” by Gloria Anzaldua 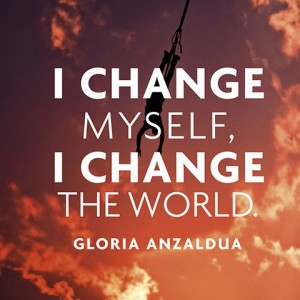 In the half-biographical book Borderlands/La Frontera: The New Mestiza, Gloria Anzaldua touches on the issue of deviation in modern American society. The book itself is a collection of essays and poems that relate to the experience of Anzaldua herself. Having grown up in the United States, being a Chicana, a woman, and a lesbian, the author seems to have felt the issue of deviation personally. The problems explored in the essays and poems are about feeling different and being blamed for that, sensing an unfitness within the community, being unable and unwilling to conform to the social norms you do not understand, or consider unfair. Anzaldua does an amazing job sharing and passing on her feelings and emotions to the reader, probably due to the fact that every single one of those feelings and emotions is true, strong. and at times painful.

When it comes to cultural differences, the issue of deviance is critical. The norms, beliefs, and traditions of a foreign culture are sometimes seen as strange or simply wrong. Anzaldua touches on this issue from two different sides. As a Chicana, she was deviant towards American society since her culture, the language she spoke, and the way she looked were different. As a lesbian, she was deviant towards her own culture as well, since the role of a woman in Hispanic traditions is rigidly perceived as that of a weaker, indecisive person who completely and absolutely depends on the man in the family. “…The Church insists that women are subservient to males” (Anzaldua, 1987) and attending church is a major social aspect in Hispanic culture. It is men who make decisions—not just for themselves, but for their wives and children as well. It is men who have the freedom of choice.

Anzaldua describes how she experienced the feeling of being deviant towards society and not belonging to the community she lives in, “The queer are the mirror reflecting the heterosexual tribe’s fear: being different, being other than and therefore lesser, therefore sub-human, in-human, non-human” (Anzaldua, 1987). Acknowledging that someone is different from you in their thoughts, opinions, behavior, and appearance is not as easy as it may seem when these qualities matter to you. But acknowledging that being different is not better or worse—it is simply not the same—is what many people fail to do, often without even realizing how intolerant they are. The author herself, however, shows that she is in every way broadminded about her beliefs, her opinions, and even the language she speaks—the book is written equally in English and Spanish. The author naturally switches from one language to the other, showing not simply that she is bilingual, but that she is a human being above all other qualities, and it is the content, the meaning behind words that matters, not the form or language in which they are written.

In the introduction, Anzaldua turns to nature. She describes the ocean—its beauty, its freedom, and its unity. The essence of nature is about being inseparable; different plants, creatures, and natural phenomena—interconnected and interdependent, living in balance. But humans are the exception, as we create unnatural borders. We separate, segregate, label, and discriminate; we suppress and enforce conformity. I believe this is one of the main themes of the whole book. After all, the most important and powerful borders are not the physical ones, but those social castes, groups and ceilings that are unbreakable despite the fact that so many choose to deny their existence.

Language is a Place of Struggle: Great Quotes by People of Color (2009). Edited by Tram Nguyen. Beacon Press.