Is It Ever Too Late to Study? 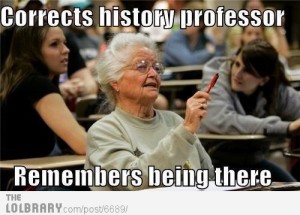 Ninety seven years old—this is the age of the oldest student in the world that graduated from a university, who has recently received a Masters in Clinical Science—76 years after attaining his first university degree. Alan Stuart already has four degrees and is a qualified dentist, surgeon prosthodontist, lawyer, and general practitioner. And it does not look like the man is going to stop at that. Some will probably say he is crazy, and might have a point. However, as extreme as this example may seem, a question remains highly debatable: “Is it ever too late to study?”

Studying is one of the main tools used to gain knowledge in a variety of subjects, notions, and the world around us in general. It is the basic channel of perception of reality, which we otherwise would be unable to understand. Ignoring the opportunity to study would basically be equal to ignoring the whole world that surrounds us (Francis, Withered Knowledge). Therefore, it stands as perfectly reasonable to further one’s education after graduating from high school—it is highly encouraged by American culture as a whole as well.

Higher education in the United States is viewed as a wise choice, as it invests in one’s future and gains an asset that will be one’s stronghold when climbing up the social ladder. At the same time, college and university education in the United States is extremely pricey. Many high school graduates do not have an opportunity to continue their education right away (Saiz, Report on Education to Career Conversion). Therefore, when a person has already achieved a stable career is standing on both feet and knows exactly what it is he or she wants to deepen their knowledge in, he or she has the right to continue at the point he or she once stopped at—and become a university student.

With the American educational system being arguably a flexible one, you do not even have to become a full-time student anymore to learn more about the subjects that interest you. You can take a few courses at a certain university, pay the fees, and attend the classes for your own purposes. You will not receive a full-scale diploma for finishing a few courses, but if what you are looking for is knowledge and practical use, not the little piece of paper proving you are worthy of taking on a certain profession, then this option is exactly the right fit for you.

Nevertheless, it is believed that after some point in life, it becomes too late for activities such as being a student. A student in the US is a certain social role that is closely associated with other concepts other than the actual studying: dorm life, campus activities, student parties, academic honor societies, dances, and many more (Poplar, Cultural Heritage of College). Choosing to be a student in many cases means you are willing and able to take on the whole package, or otherwise you risk feeling like an outcast and dropping out of school, even if the classes are interesting and the professors are fantastic. When you consider applying to a specific university after a certain age, when the above mentioned happenings become of a lesser value to you, look at those institutions that are more flexible and do not require living on campus and fully engaging in the academic and non-academic sides of university life.

Another factor that might get in the way of effective studying after a certain age is your capabilities. If you decided to finally (or once again) become a student, it is implied that you have the required desire to learn, listen, and absorb the knowledge. However, unfortunately, sometimes just the desire itself is not enough. It is a known fact that with age, our memory, attention, and ability to learn may decrease greatly—studying may become a much more difficult challenge than it could have been when we were younger (Ramon, Obstacles of the Old Student). At the same time, if you have the dedication, motivation, and persistence to become a student at a later stage in life, I suppose these traits will aid you in achieving your aim as well.

Studying is a necessity rather than a privilege. It should never be too late to study if a person wants to. There is no doubt that setting an expiration date on one’s opportunity to learn and follow their dreams would be wrong. Despite all the analyzed obstacles that may possibly come in the way of studying, they should not become an insurmountable barrier in the path of one’s self-actualization.