We live in times of proclaimed tolerance towards a wide variety of world-outlooks, religions, occupations, and other activities in which modern people are engaged. To some extent, it simplifies communication as well as facilitates freedom and understanding between people. However, many ideas that were once considered normal are now misperceived as inappropriate, especially if they break from the smooth picture the ideology of general tolerance cultivates. On the other hand, lots of radical concepts find their place in the public mind. One such concept is chauvinism—a term used to characterize a number of negative social phenomena. 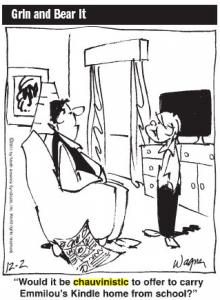 It is synonymous with prejudice of almost any kind. The term has its origins in the times of the Napoleonic wars (Hacus 231). Its appearance in language goes back to a French soldier named Nicolas Chauvin, who was known for his exaggerated patriotism. He remained a zealous supporter of Bonapartism, despite the fact that it had become quite unpopular during the Bourbon Restoration. Chauvin idolized the deposed Emperor, even being poor and disabled. His last name was used to create a term defining a specific outlook which he shared. However, later the term’s meaning broadened.

Thesaurus.com defines chauvinism as an “Extreme devotion to a belief, or nation.” According to Merriam-Webster online, chauvinism is an “Excessive or blind patriotism; undue partiality or attachment to a group or place to which one belongs or has belonged; an attitude of superiority toward members of the opposite sex.” Finally, on Dictionary.com, chauvinism is defined as “Zealous and aggressive patriotism or blind enthusiasm for military glory; biased devotion to any group, attitude, or cause; the denigration, disparagement, and patronization of either sex based on the belief that one sex is inferior to the other and thus deserving of less than equal treatment or benefit.” Based on the aforementioned definitions, chauvinism can be characterized as a blind attachment to a certain nation, religion, group of people, or sex, and an extreme prejudice against the members of opposite or different groups. Thus, a chauvinist is a person who shares these kinds of attachments and prejudices.

This concept is used when referring to nationalism and sexism. Chauvinism can be perceived as the ideology of proving and preaching the superiority of a certain nationality, which supposedly gives one nation a right to discriminate and oppress others. Chauvinism as nationalism lies close to a phenomenon of jingoism and is typical for many ultra-right organizations. Skinheads, Jingos, Chavs, and other radical nationalistic subcultures and movements can be called chauvinistic.

On the other hand, chauvinism as sexism refers both to males and females, as it assumes the belief in the superiority of one sex over the other. Male chauvinists believe women must stay at home, cook and raise children, while men are supposed to live an active life, build careers, and self-actualize (Iota 156). At the same time, some forms of modern feminism can be referred to as female chauvinism. For example, despite the fact that Islam strictly prohibits male chauvinism, Muslims are often considered disdainful in the way they treat their women, though this is not true with the majority of Muslims. Or on the contrary, women often furiously argue about the numerous advantages of women over men. This can also be called chauvinism.

It can be said that chauvinism is a phenomenon that can hardly be tolerated in the modern world. Though there exists a strong forbearance to numerous outlooks and ideologies in various societies, chauvinism cannot be accepted, since it implies hostility and supremacy towards groups with different values. Chauvinism is a term used to characterize intolerance based on nationality or gender, though it can also refer to other spheres of influence, such as religion or political ideology.