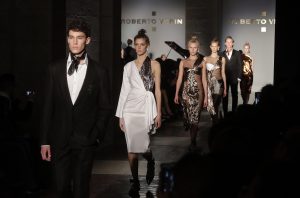 The fashion industry has been “fashionable” since the Industrial Revolution, but clothing fashion has been around since humans have existed. Technically, fashion can be used as a noun or a verb. As a noun, we can see it all around us in the choices people make with their clothing and the ideas they inject into their clothing designs. As a verb, we can witness objects, ideas, and other phenomena being fashioned, or created. Not surprisingly, the word “fashion” does have a link to the French language, but it is more complicated than that. In the following paragraphs, I will explain about the etymology of “fashion” and also the different implications of the word.

Initially, we can look at the etymology of “fashion.” The progression of the word “fashion” stretches fairly far back in time. Its first variant was in Latin with “factiō” (“a making”), which was originally derived from “faciō” (to make). So, it was first a verb, then a noun in Latin. Eventually, it moved onto Old French as three variants: faceon, fazon, façon. These three words have various meanings, such as fashion, form, make, and outward appearance. However, it got simplified in Old Northern French when it became just “fechoun” which means a fashion or a way. The same word travelled to Anglo-Norman, and eventually ended up in Middle English as “facioun.” At present, “fashion” is an internationally accepted word that most languages integrate into their system (Wiktionary).

As mentioned before, “fashion” is employed as a noun and as a verb. It has two meanings as a noun: “A popular or the latest style of clothing, hair, decoration, or behaviour,” and “A manner of doing something” (Oxford Dictionaries). In its verbal form, it has one meaning, “Make into a particular form,” but also it being used as phrase, “fashion something into” (Oxford Dictionaries). Yet, these are only the technical definitions of “fashion,” and the word relates to many different areas of life.

Fashion consequently relates to trends. These trends are often connected to the fashion industry, clothing fashions, political influences, technological influences, social influences, economic influences, and consumers’ needs. Clothing fashions have developed from necessity and traditions, whereas the fashion industry was built on novelty. Relating to this, PBS states that, “One certain thing in the fashion world is change. We are constantly being bombarded with new fashion ideas from music, videos, books, and television. Movies also have a big impact on what people wear. Ray-Ban sold more sunglasses after the movie Men In Black. Sometimes a trend is world-wide. Back in the 1950s, teenagers everywhere dressed like Elvis Presley” (PBS). The fashion industry grew out of the Industrial Revolution in France, but clothing fashion has existed for as long as humankind has been around. Fashion trends are often connected to politics. For example, whatever public figures wear, especially governmental public figures, is often reported in the news and commented on by fashion analysts. In addition, technology plays a part in fashion by producing countless wearable gadgets, and also the way fashion shows are presented. The social influence on fashion is enormous, with famous people in the media constantly affecting how fashion trends turn. Economics can also affect fashion, as downturns and upturns in an economy can sway what people wear and what clothing they purchase. Finally consumer’s needs affect fashion, as not only is the consumer the driving force behind innovation in fashion (since they buy clothes from designers and allow the designer’s careers to stay afloat), the consumer also usually vies for comfort and practicality when purchasing clothing. There are exceptions when people buy certain clothing for style, but the vast majority of clothing is bought on the basis of it being suitable for everyday situations (Suttle, Rick).

Fashion as a word began to form in Latin, went to Old French, Old Northern French, Anglo-Norman, and came conclusively to Middle English. It is seen now as both a noun and a verb, and is affected by politics, economics, society, technology, and consumer’s needs. The meaning of fashion has been firmly planted since the Industrial Revolution, and it looks like it will not change its meaning anytime soon.