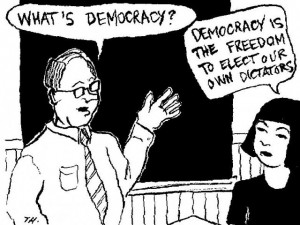 Turn on your TV and switch to a news channel. Take a pencil and a sheet of paper and prepare to take notes. Your aim is to count the use of one of the most popular words in the modern world. This word is democracy. I bet you will hear it at least 5-6 times within an hour. The word democratic has almost become a synonym to such adjectives as ‘good,’ ‘fair,’ and ‘equal’ (George 324). Politicians use it to evaluate the domestic and foreign policies of their neighbors, opponents, and allies. Simultaneously, it is obvious that in many cases, this word is misunderstood, as well as used for manipulation.

What is democracy? Why has it become the cornerstone of modern civilization? Democracy can be understood as a process of people governing their state and managing community affairs based on consensus (Howards 27). Though democracy is often defined as a form of government, to my mind, it is more reasonable to contemplate it as a process, a constant opportunity by which citizens may bring changes into their social and political life.

The origins of democracy lie in Ancient Greece. This term was constructed from two Greek words: ‘demos,’ which means ‘people,’ and ‘cratos,’ which means ‘power.’ A long time ago, Greek men used to gather in the town square to make decisions about urgent political issues. Greek democracy was direct—not only in the sense that citizens could vote for decisions personally, but also in the sense that they could control the political process and the authorities. It must be pointed out that back then, not everyone could take part in voting—this privilege was only available to male citizens. Slaves—and ancient Greece was a slavery state—and women could not affect social and political life (George 76).

Along with the population’s growth and the complication of political processes, it had become almost impossible to conduct direct democracy. This led to a representative democracy—the model which is used all over the world today. It may be constitutional, parliamentary, or presidential—the main feature is that people affect political life through the representatives they have chosen through elections (Howards 35).

Modern democracy implies many privileges that ancient Greeks did not know of. For example, people now can vote regardless of their gender, skin color, social status, or financial position. Democracy is considered to be the optimal way to run the state, however many critics talk about democratic tyranny and even the injustice of this form of government (Howards 56). Imagine that in a presidential election, 49% of the electorate vote for one candidate, and 51% vote for another. The second candidate wins the election, but what about those people whose interests are subjected to the will of the majority?

Democracy is a complicated and versatile phenomenon that can be studied from different approaches. However, as Sir Winston Churchill had said once: “Democracy is the worst form of government except for all those others that have been tried.”