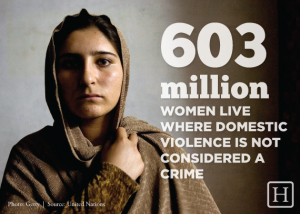 Most often, under the term domestic violence, people denote physical or sexual coercion; though this is a reasonable definition, domestic violence is a significantly wider term that requires clarification. Domestic violence is a narrower term for domestic abuse – a behavior pattern which implies controlling or dominating one person who is an intimate relationship, whether it be a partner, children, or relatives (Helpguide). It may have physical, emotional, sexual, and economic aspects, sometimes combining several of them simultaneously. The main purpose of such control is to completely suppress the partner’s will, and manipulate them. This is achieved by behavior that can be classified as frightening, intimidating, terrorizing, hurtful, humiliating, blaming, injuring, wounding, and so on (The Hotline).

There are several criteria for sexually or physically abusive behavior. Though it may seem that victims of domestic violence should be able to distinguish it, in reality many victims tend to perceive violent behavior as normal. Most of all, it refers to emotional and economic domestic violence, because they are more difficult to determine than physical or sexual abuse. For example, the signs of emotional abuse are: calling names, acting jealous and/or possessive, punishing by withholding affectation, threatening and humiliating (The Hotline). Financial abuse has the following signs: rigid control over a partner’s finances, withholding money and/or basic necessities (such as food, clothes, medications, or shelter), stealing, preventing a partner from working, and many other indicators (Helpguide).

Domestic violence refers not only to women or children. Men suffer from it as well: mostly emotionally, though cases of physical violence are not rare as well. The main fact to comprehend about an abusive relationship is that the partner who acts as an aggressor will not change, and will not stop their insulting behavior. The best option for people who suffer from any kind of domestic violence is to break the relationship. It is useless to expect a certain behavior or opposition will calm the violent partner down.

Domestic violence remains a significant social problem in many countries all over the world. Some of its forms are obvious (such as sexual or physical violence), while other are not so easy to distinguish. Such forms are emotional and financial abuse. Emotional abuse involves humiliating, threatening, and manipulating, while financial violence can express itself in a partner limiting the economic freedoms of their counterparts. The victims of domestic abuse should not expect improvements: the best option for them is to break away from their abusive relationship.