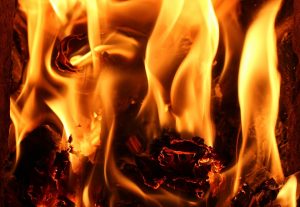 “Heat” is a loaded word. It crosses with physics, slang, everyday language, and more. As a term, “heat” is fairly old and diverse across different languages. In the following paragraphs, we will explore its many definitions, its etymology, and some of the everyday phrases it is used in.

The word “heat” can be used as a noun or a verb. In its form as a noun, it can mean, “The quality of being hot; high temperature” (Oxford Dictionaries). However, this meaning can be broken down into different areas of interest. In physics, “Heat seen as a form of energy arising from the random motion of the molecules of bodies, which may be transferred by conduction, convection, or radiation,” in meteorology as “Hot weather conditions,” in a culinary sense with “A source or level of heat for cooking,” in terms of spice as “A spicy quality in food that produces a burning sensation in the mouth,” a technical explanation like “The amount of heat that is needed to cause a specific process or is evolved in such a process” and “A single operation of heating something, especially metal in a furnace,” and even emotion: “Intensity of feeling, especially of anger or excitement” (Oxford Dictionaries). The word “heat” does not give up there in the definition department. As a verb, it stands as, “Make or become hot or warm.” This verb can be separated into three categories as well: “(heat up) [no object] (of a person) become excited or impassioned,” “(heat up) [no object] Become more intense and exciting,” and “(archaic) [with object] Inflame; excite” (Oxford Dictionaries). As you can see, though we think of “heat” as a simple word, it can be perceived in a variety of ways.

Now that we know the holistic view of its definition, let us look at where the word came from. The linguistic genealogy of “heat” began with the Proto-Indo European word “kayd,” which is a derived form of the word “kay.” It also meant heat or hot. “Kayd” travelled to Proto-Germanic as “hait,” which meant simply heat. But it became more complicated when it landed in Old English as hǣte, as it had the meaning of heat, warmth, fervor, and ardor. A word with the same definition transferred to Middle English as “hete” (Wiktionary). From “kayd” to “hete,” you can see how the sound was somewhat retained, but the definitions aligned with it started off being fairly simple, got simpler, but along the way became complicated as Old English tagged more meanings onto it.

“Heat” is not just a technical word, but it is also used in common phrases often. One such phrase is, “If you can’t stand the heat, get out of the kitchen.” Basically, it is saying that if you cannot stand the pressures of a situation, it is better that you don’t take it on. It is usually used when someone is complaining about a circumstance. Another popular phrase involving “heat” is, “in the heat of the moment.” It denotes doing something when angry, upset, or engrossed. It can refer to violence, something spoken, or a sexual act. Also, there is “on heat” or “in heat.” The first is the British way of going about it, and the second is the American style of saying it. It refers to when a female mammal is in the receptive period of her sexual cycle. Dipping into the ebonics dictionary, “heat” commonly means a weapon, especially a gun. Finally, “heat” can mean the intenseness or power of something; an example sentence of this concept is, “Matt is taking the heat for what David did.” The word “heat” is often used in hip hop and rap songs, and its definition in terms of slang is constantly evolving.

The term “heat” has many definitions as a noun and verb in its present form, and has gone through an arch of evolution. It began as a Proto-Indo European word, and gradually moved into Middle English, with most of its complexity being integrated into its definition within Old English. In terms of its common uses and slang, there are several main phrases “heat” is used in, and in slang, “heat” is employed in a variety of ways, especially in popular music.