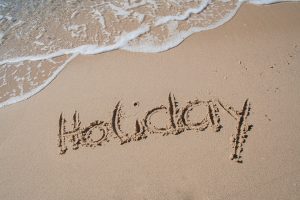 The word “holiday” is always pleasant to hear, whether we are participating in one or we are hearing about one from something else. We might think of the term originating from “holy” and “day,” and that is not far from the mark. Below, we will explore the etymology, definitions, and uses of this common word that everyone loves.

The origin of the term came from Old English when describing the Sabbath. The Sabbath is a period of time of worshiping and remembering God. For the Jewish people, the Sabbath lasts from Friday evening to Saturday evening, whereas it is only on Sunday for Christians. The word is the equivalent of “holy” plus “day,” but in Old English it was written as “hāliġdæġ.” This ancient word is cognate (comes from the same linguistic derivation) with “West Frisian hjeldei (“holiday”), Danish helligdag (“holiday”), Norwegian helligdag (“holiday”), Swedish helgdag (“holiday, feast”)” (Wiktionary). From Old English, it traveled to Middle English in a variety of forms: halyday, holyday, halidei, haliȝdei. Luckily, in Modern English, we have chosen just one spelling of it.

Now let us move onto the definitions of “holiday.” I always trust Oxford Dictionaries to give me the correct definitions of terms. According to this resource, British people use this noun as “An extended period of leisure and recreation, especially one spent away from home or in travelling.” In America, we usually replace “holiday” with “vacation.” A more specific definition is, “A day of festivity or recreation when no work is done.” It can also be used as a modifier: “Characteristic of a holiday; festive.” For example, “this is quite the holiday atmosphere.” In its turn, it can also be used with a modifier: “A short period during which the payment of installments, tax, etc. may be suspended.” For instance, “It seems the workers are taking a tax holiday.” In Britain, it can be employed as a verb on occasion: “Spend a holiday in a specified place.” For a look at this slang: “he is holidaying in Cambodia right now” (Oxford Dictionaries). As you can see, over time, the word was associated with the Sabbath, but later turned into a more secular term that is commonly used in work environments.

There are so many different types of holidays and holidays themselves that it would be difficult to count them all. However, holidays can be broken down into winter holidays, national holidays, international secular observances, unofficial holidays, and religious holidays. For examples of winter holidays, one can name Thanksgiving and New Year’s Eve. In fact, from the period of November until the new year, it is known to be the holiday season. In terms of national holidays, each country, republic, and nation has its own holidays based on what its government proclaims as a day of celebration. Independence days are commonly celebrated in every country, for instance. Some examples of international secular observances are days marked on the United Nations Calendar of Observances, such as commemorating World War II veterans and International Women’s Day. Unofficial holidays have become increasingly popular as well. Arbitrary holidays seem to pop up on social media all the time. There might be holidays celebrating monkeys, cucumbers, guns, and what have you. It all depends on organizations, groups, and other platforms that want to make their own holidays. Some holidays such as April Fool’s Day are popular forms of unofficial holidays that have caught on through the generations. But perhaps the most prominent number of holidays come from religious organizations. There are so many religious holidays within each faction of spiritual belief that it would take lifetimes to count them all and to understand them. Though Christian holidays are some of the most famous (Christmas, for instance), there are also plenty of Islamic, Judaist, Buddhist, Jain, and Hindu holidays that could fill encyclopedias. The Hindu religion alone has hundreds of holiday traditions, based on each of their hundreds of gods. This is not to mention the many minor religious groups and spiritual practices that have their own holidays and observances. Even more mind boggling is when people are from interfaith organizations, and they will celebrate holidays from multiple religions at a time.

Taking all this information in, we can say succinctly that “holiday” derives from Old English and moved onto Middle English, until it landed into modern usage. The definition of the term transferred from being associated with the Sabbath and became connected with vacations from work and school. Additionally, there are thousands of national, international, unofficial, and religious holidays one can talk about. All this discussion has led me to one thing: I think it is time for me to take my own holiday.