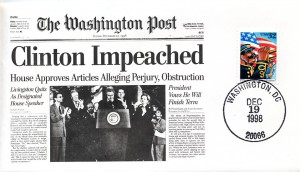 On October 16, calls for the impeachment of U.S. President Barack Obama sounded once again. Former Alaska governor Sarah Palin, and Texas Lieutenant Governor David Dewhurst called Obama’s recent political moves impeachable, and thus made their calls (Washington Times). However, as practice shows, many people confuse the procedure of impeachment with an official’s removal from office. Since an impeachment is an act that affects an entire country’s life, several clarifications need to be made to avoid such confusion of terms.

According to the online Free Dictionary by Farlex, the verb “to impeach,” from which the discussed term comes from, means “to make an accusation against.” This word can be traced back to the Anglo-Norman word empecher, as well as to the late Latin “impedicare.” Both of these words mean “to catch,” or “to entangle.” The Middle English word “empechen” means “to criticize unfavorably.” As for its legal sense, this word was first used in the 14th century in the context of accusation and bringing charges against an official (The Free Dictionary).

In its modern meaning, impeachment means charging a public official before a competent tribunal with misconduct in office (Merriam-Webster). However, as practice shows, many people misunderstand this term; they presume that impeachment means an official’s (particularly, the President’s) removal from their office. Impeachment could be defined as a procedure of accusing an official of a certain misconduct and, in relation with this, claiming distrust in them, but without a necessary removal of this official from his or her respective office. According to Article II of the Constitution of the United States, among such misconducts are treason, bribery, and other high crimes.

At the same time, for the U.S. President to be removed from office, a majority of the House of Representatives must vote on the Articles of Impeachment, which is almost the same as a prosecution for a crime. The actual removal from the office can occur only when two-thirds of the Senate vote for it. The history of the U.S. has cases when Presidents have been impeached, but were still not removed from their cabinets (Washington Times).

Impeachment today is a contentious topic for America. Several officials—the former governor of Alaska and the current Lieutenant Governor of Texas have called for an impeachment of the U.S. President Barack Obama. However, impeachment does not necessarily mean removal of an official from office. Impeachment is a procedure of accusing an official of a certain misconduct and, in relation with this, claiming distrust in them. The removal from the office, however, can occur only when two-thirds of the Senate vote for it on the initiative of the House of Representatives.