Introversion as a Norm 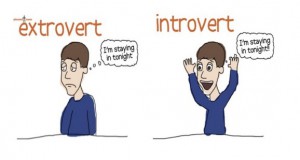 Today’s world values activity. People are assessed by how much they do, how they behave, how communicative they are, and how well they socialize. The active way of life is the undisputed desirable norm, and many people around the world take a high level of activity for granted—they never question it. However, there are also a group of people, who, due to their personality, feel uncomfortable about being excessively active. This personality type is known as an introvert. This term has come to be used as a synonym for grim, dull, or even asocial, and thus needs to be clarified, since introversion is not a pathology. Introverts have a different approach to life from the one that has been adopted as exemplary by mainstream culture.

So what is introversion? Merriam-Webster’s Online dictionary defines introversion as the state or tendency toward being wholly or predominantly concerned with and interested in one’s own mental life. Dictionary.com, among other meanings, defines introversion as being a shy. According to Charles Martin, an introvert is a person whose “energy comes from dealing with the ideas and reactions within one’s head, in the inner world” (Martin). Susan Cain says that, opposite to extroverts, “introverts prefer less stimulating environments and tend to enjoy quiet concentration, listen more than they talk, and think before they speak” (Cain).

In light of this, introversion can be defined as an individual’s tendency to concentrate and reflect on their own inner world, giving a priority to thinking over acting, and adhering to a comfortable environment. They prefer to spend more time on their own or with a couple of people they know well.

Introversion grants individuals with a set of features, which makes them completely different from the type of personality presented by extroverts. According to Cain, introverts prefer to limit their circles to a few acquaintances; however, they build extremely stable and long-lasting relationships (Cain); they tend to know people better than extroverts. Introverts become exhausted rather quickly by constant contact with other people.

Introverts often prefer to work alone as opposed to with a team. They do not take action as quickly as extroverts, and tend to ponder over a problem at hand before starting to solve it. However, due of this, they often foresee consequences that escape their extrovert counterparts, thus taking more effective actions and making more efficient decisions. Due to the peculiarities of their thinking process, introverts are often misunderstood by those around them; they are often believed to be detached and unemotional, though they might be simply thinking about their interlocutor’s words. They could be experiencing a real emotional storm inside, but show little of it on the outside.

Introversion is considered an aberration, but this is because modern societies have developed so many extroverts. According to Marty O. Laney, about 75% of people are extroverts (Laney). She also claims that personality types cannot be changed—only slight modifications are possible. This can seem upsetting, but in fact, it allows many people to feel comfortable with their introversion. They can stop trying to become someone they are not and learn how to live comfortably in the extroverts’ world.

Therefore, introversion is not an aberration or pathology. In fact, it is a type of personality, possessed by approximately 25% of the world’s population, which involves a completely different way of thinking and functioning than is considered normal nowadays. Generally speaking, introversion is a tendency to concentrate on the inner world. Introverts often give priority to thinking over acting, and prefer to adhere to a comfortable environment. They are as sociable as extroverts, but choose to limit the number of people they associate with. They prefer instead to establish deeper relationships with fewer people. Being an introvert is a unique chance to look at the world from the other side, and there is no need for such individuals to try to be someone else.