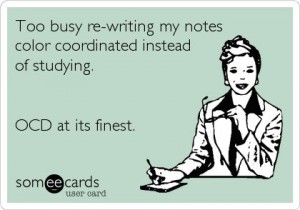 I think people who are not too educated in psychology—and supposedly, they make a majority—think that psychological disorders must manifest themselves in anti-social behavior, strange passions, autistic behavior, or in any other similar way. But what if many of the people around us, whom we consider normal, even our friends and family members, actually suffer from psychological disorders? What if they are obsessed and locked-up in the prison of their own minds? What I am talking about here is called an OCD: an obsessive-compulsive disorder.

The term OCD consists of two defining words: obsession and compulsion. As the word “disorder” speaks for itself, defining obsession and compulsion is crucial for understanding this problem. According to the Merriam-Webster Dictionary, obsession is a persistent disturbing preoccupation with an often unreasonable idea or feeling. Compulsion, in its turn, is an irresistible, persistent impulse to perform an act—often to deal with the obsession. An OCD can be defined as a condition of the mind characterized by a constantly repeating intrusive idea or thought, which can be neutralized only by a certain act or ritual.

Reasons standing behind a particular OCD can be numerous. One of the latest research studies points to genetics, brain abnormalities, life events, parenting and upbringing, and even infections (NHS). Forms OCDs can take are also numerous, though generally they can be classified under such categories as checking, contamination, hoarding, and intrusive thoughts. People with a checking OCD constantly check domestic appliances, windows, car doors, and so on. A contamination OCD often manifests itself in an individual’s urgent need to wash his or her hands or body and to avoid “dirty” items. Hoarding OCD often prevents people from throwing away objects, even those that are unnecessary. OCDs connected to intrusive thoughts make individuals fear their own inappropriate thoughts.

It is important to mention that people with an OCD never (or rarely) do or experience what they are afraid of. For example, people who have intrusive violent or sexual thoughts are the least likely to act on these thoughts, partly because they find them so frightening and “wrong.” It also refers to people who have obsessions to check items and domestic appliances: because they are so attentive, these people are unlikely to cause fire, flood, or other property or health damage. OCD fears can be fairly called irrational. Nevertheless, OCDs consume excessive amounts of time, cause significant distress and anguish, and interfere in daily functioning (OCD-UK). Successful treatment is possible, but in most cases, OCD-sufferers cannot deal with their fears on their own, and need professional help.

An OCD is not an anti-social psychological disorder. On the contrary, many people with OCDs are less likely to harm people or to be inaccurate and negligent. An OCD is a permanent state of mind in which a person has constantly repeating intrusive ideas or thoughts, which people with an OCD believe can only be neutralized by certain acts or rituals. Unfortunately, these people continue to suffer from their irrational fears and have to repeat their rituals to calm down. Fears or obsessive thoughts that disturb such individuals most often fall into such categories as checking, contamination, hoarding, or ruminating. Reasons behind OCDs are numerous, and include genetics, brain abnormalities, life events, parenting and upbringing, and infections. The good news is that OCDs can be successfully treated with the help of competent specialists.