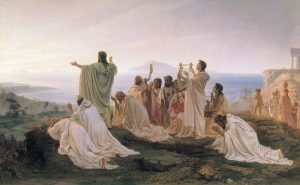 Philosophy is usually used in a grandiose sense. To philosophize is something that sets us apart from other animals, it seems. If we wonder about our place in the universe, why we exist, and other conundrums, we can be said to be delving into philosophy. Anyone can be a philosopher—especially nowadays with a vast amount of online information at our disposal and our ever-growing inclination as a species to be inquisitive. This is all well and good, but what are the exact origins of the word, the precise definitions of the term, and its many categories? We will explore this question in the following paragraphs.

Well, in English, the word we have today stems from Ancient Greek. The ancient Greek word φιλοσοφία (philosophía) comes from φίλος (phílos, “loving”) plus σοφία (sophía, “wisdom”). The basis of western philosophy originates from Greek philosopher Socrates, so this should not be such a surprise. This Greek term could infer that you love wisdom, or there is a loving wisdom. The word eventually was grabbed by Latin as “philosophia.” From Latin, it moved onto Old French as “philosophie,” and Middle English used it as well with the same spelling. Modern English adapted the spelling, but not much else (Wiktionary).

Now, let us take a look at the various definitions “philosophy” has obtained over the eons. The most trustworthy dictionary out there is the Oxford Dictionary, so we will use it for this essay. “Philosophy” is employed only as a noun. As a mass noun, it means, “The study of the fundamental nature of knowledge, reality, and existence, especially when considered as an academic discipline.” When it is in its form as a count noun, it denotes, “A particular system of philosophical thought.” In a more general sense, it is, “The study of the theoretical basis of a particular branch of knowledge or experience.” In a more social and casual context, it is defined as, “A theory or attitude that acts as a guiding principle for behaviour” (Oxford Dictionaries). As you can see, the definitions are fairly clear cut for something that is notably difficult to talk about.

However, looking at the origins and definitions of “philosophy” is only touching the surface of understanding this term. In order to fully grasp what philosophy is about, we need to look at how this discipline is categorized. There are five major branches of philosophy: metaphysics and epistemology, value theory, science/logic/mathematics, the history of western philosophy, and philosophical traditions. I will give a rundown of these five branches. With metaphysics, people study the basics of existence, like time, objects, causation, and more. This is linked to epistemology, as it is the study of knowledge itself. Moving onto value theory, it is the discussion of values such as beauty, goodness, and justice, which incorporates ethics, aesthetics, the philosophy of law, and so on. In relation to science, logic, and mathematics, Richard Feynman, a prominent American theoretical physicist, said that the “philosophy of science is as useful to scientists as ornithology is to birds.” In this respect, philosophy is often the basis and the result of many disciplines (Carnap, Rudolf). Philosophy is also intertwined with history. In fact, most philosophers specialize in studying in one time period and its relation to philosophy. Also, there are tons of philosophical schools and traditions within varying religions, spiritual sects, and even educational institutions. Philosophy is such a wide topic that it might take a philosopher to understand its reach.

Taking all of this information in, we can say with certainty that defining “philosophy” is kind of philosophical in itself. Though the origins of the word are clear, and the official definitions of the term are not obscure, the ways in which philosophy is viewed by various disciplines and how it interacts with different studies is incredible in its reach. In fact, we can say that philosophy is in every study—if not just a bit.