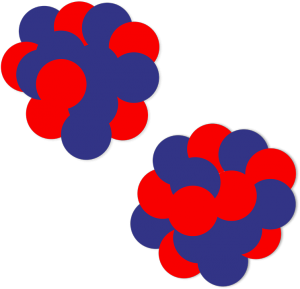 How would one find out what types of atoms there were? Today, it does not seem like it should have been difficult to work out an experimental program to classify the types of atoms. For each type of atom, there should be a corresponding element, i.e., a pure substance made out of nothing but that type of atom. Atoms are supposed to be unsplittable, so a substance like milk could not possibly be elemental, since churning it vigorously causes it to split up into two separate substances: butter and whey. Similarly, rust could not be an element, because it can be made by combining two substances: iron and oxygen. Despite its apparent reasonableness, no such program was carried out until the eighteenth century.

By 1900, however, chemists had done a reasonably good job of finding out what the elements were. They also had determined the ratios of the different atoms’ masses fairly accurately. A typical technique would be to measure how many grams of sodium (Na) would combine with one gram of chlorine (Cl) to make salt (NaCl) (this assumes you have already decided, based on other evidence, that salt consisted of equal numbers of Na and Cl atoms). The masses of individual atoms, as opposed to the mass ratios, were known only within a few orders of magnitude based on indirect evidence, and plenty of physicists and chemists denied that individual atoms were anything more than convenient symbols.

The following table gives the atomic masses of all the elements on a standard scale in which the mass of hydrogen is very close to 1.0. The absolute calibration of the whole scale was only very roughly known for a long time, but was eventually tied down, with the mass of a hydrogen atom being determined to be about 1.7×10−271.7×10−27 kg.

As the information accumulated, the challenge was to find a way of systematizing it; the modern scientist’s aesthetic sense rebels against complication. This hodgepodge of elements was an embarrassment. One contemporary observer, William Crookes, described the elements as extending “before us as stretched the wide Atlantic before the gaze of Columbus, mocking, taunting and murmuring strange riddles, which no man has yet been able to solve.” It was not long before people started recognizing that many atoms’ masses were nearly integer multiples of the mass of hydrogen, the lightest element. A few excitable types began speculating that hydrogen was the basic building block, and that the heavier elements were made of clusters of hydrogen. It was not long, however, before their parade was rained on by more accurate measurements, which showed that not all of the elements had atomic masses that were near integer multiples of hydrogen, and even the ones that were close to being integer multiples were off by one percent or so.

Chemistry professor Dmitri Mendeleev, preparing his lectures in 1869, wanted to find some way to organize his knowledge for his students to make it more understandable. He wrote the names of all the elements on cards and began arranging them in different ways on his desk, trying to find an arrangement that would make sense of the muddle. The row-and-column scheme he came up with is essentially our modern periodic table. The columns of the modern version represent groups of elements with similar chemical properties, and each row is more massive than the one above it. Going across each row, this almost always resulted in placing the atoms in sequence by weight as well. What made the system significant was its predictive value. There were three places where Mendeleev had to leave gaps in his checkerboard to keep chemically similar elements in the same column. He predicted that elements would exist to fill these gaps, and extrapolated or interpolated from other elements in the same column to predict their numerical properties, such as masses, boiling points, and densities. Mendeleev’s professional stock skyrocketed when his three elements (later named gallium, scandium, and germanium) were discovered and found to have very nearly the properties he had predicted.

One thing that Mendeleev’s table made clear was that mass was not the basic property that distinguished atoms of different elements. To make his table work, he had to deviate from ordering the elements strictly by mass. For instance, iodine atoms are lighter than tellurium, but Mendeleev had to put iodine after tellurium so that it would lie in a column with chemically-similar elements.

The success of the kinetic theory of heat was taken as strong evidence that, in addition to the motion of any object as a whole, there is an invisible type of motion all around us: the random motion of atoms within each object. But many conservatives were not convinced that atoms really existed. Nobody had ever seen one, after all. It was not until generations after the kinetic theory of heat was developed that it was demonstrated conclusively that atoms really existed and that they participated in continuous motion that never died out.

The smoking gun to prove atoms were more than mathematical abstractions came when some old, obscure observations were reexamined by an unknown Swiss patent clerk named Albert Einstein. A botanist named Brown, using a microscope that was state of the art in 1827, observed tiny grains of pollen in a drop of water on a microscope slide, and found that they jumped around randomly for no apparent reason. Wondering at first if the pollen he had assumed to be dead was actually alive, he tried looking at particles of soot, and found that the soot particles also moved around. The same results would occur with any small grain or particle suspended in a liquid. The phenomenon came to be referred to as Brownian motion, and its existence was filed away as a quaint and thoroughly unimportant fact, really just a nuisance for the microscopist.

It was not until 1906 that Einstein found the correct interpretation for Brown’s observation: the water molecules were in continuous random motion, and were colliding with the particle all the time, kicking it in random directions. After all the millennia of speculation about atoms, at last there was solid proof. Einstein’s calculations dispelled all doubt, since he was able to make accurate predictions of things like the average distance traveled by the particle in a certain amount of time. Einstein received the Nobel Prize not for his theory of relativity but for his papers on Brownian motion and the photoelectric effect, in fact.