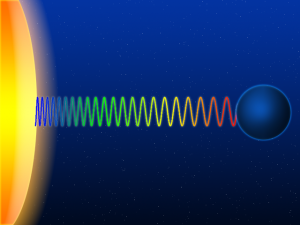 Given that fields of force are real, how do we define, measure, and calculate them? A fruitful metaphor will be the wind patterns experienced by a sailing ship. Wherever the ship goes, it will feel a certain amount of force from the wind, and that force will be in a certain direction. The weather is ever-changing, of course, but for now let us just imagine steady wind patterns. Definitions in physics are operational, i.e., they describe how to measure the thing being defined. The ship’s captain can measure the wind’s “field of force” by going to the location of interest and determining both the direction of the wind and the strength with which it is blowing. Charting all these measurements on a map leads to a depiction of the field of wind force. This is known as the “sea of arrows” method of visualizing a field.

The most subtle point about all this is that the gravitational field tells us about what forces would be exerted on a test mass by Earth, Sun, Moon, and the rest of the universe, if we inserted a test mass at the point in question. The field still exists at all the places where we did not measure it.

If we make a sea-of-arrows picture of the gravitational fields surrounding Earth, f, the result is evocative of water going down a drain. For this reason, anything that creates an inward-pointing field around itself is called a sink. Earth is a gravitational sink. The term “source” can refer specifically to things that make outward fields, or it can be used as a more general term for both “outies” and “innies.” However confusing the terminology, we know that gravitational fields are only attractive, so we will never find a region of space with an outward-pointing field pattern.

Knowledge of the field is interchangeable with knowledge of its sources (at least in the case of a static, unchanging field). If aliens saw Earth’s gravitational field pattern they could immediately infer the existence of the planet, and conversely if they knew the mass of Earth, they could predict its influence on the surrounding gravitational field.

An important fact about all fields of force is that when there is more than one source (or sink), the fields add according to the rules of vector addition. The gravitational field certainly will have this property, since it is defined in terms of the force on a test mass, and forces add like vectors. Superposition is an important characteristics of waves, so the superposition property of fields is consistent with the idea that disturbances can propagate outward as waves in a field.

In reference to the argument for the existence of energy-bearing ripples in the electric field, we see that nowhere is it necessary to appeal to any specific properties of electrical interaction. We therefore expect energy-carrying gravitational waves to exist, and Einstein’s general theory of relativity does describe such waves and their properties. J.H. Taylor and R.A. Hulse were awarded the Nobel Prize in 1993 for giving indirect evidence to confirm Einstein’s prediction. They discovered a pair of exotic, ultra-dense stars called neutron stars orbiting one another very closely, and showed they were losing orbital energy at the rate predicted by general relativity.

A Caltech-MIT collaboration has built a pair of gravitational wave detectors called LIGO to search for more direct evidence of gravitational waves. Since they are essentially the most sensitive vibration detectors ever made, they are located in quiet rural areas, and signals will be compared between them to make sure that they were not due to passing trucks. The project began operating at full sensitivity in 2005, and is now able to detect a vibration that causes a change of 10−1810−18 m in the distance between the mirrors at the ends of the 4-km vacuum tunnels. This is a thousand times less than the size of an atomic nucleus! There is only enough funding to keep the detectors operating for a few more years, so the physicists can only hope that during that time, somewhere in the universe, a sufficiently violent cataclysm will occur to make a detectable gravitational wave (more accurately, they want the wave to arrive in our solar system during that time, although it will have been produced millions of years before).