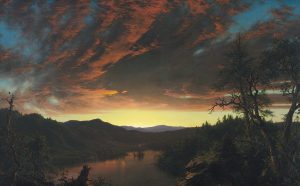 When people speak about twilight, they usually think of it as an eerie time, the popular novels named after the term, and the Twilight Zone television series. However, most people do not know what “twilight” is on a factual basis, its origins in terms of linguistics, and its various cultural references. In order to educate the general public about twilight, the following paragraphs will be dedicated to informing about this special term.

But where did this word come from? In English, the term “twilight” derives from the Old English word “twēonelēoht.” In this form, it had the same meaning as in Modern English, however. This strange-looking word traveled to Middle English as “twilight” and “twyelyghte.” The spelling transformed over time in Middle English and retained its meaning from Old English. In Modern English, “twi” refers to “double” or “half.” So, “twilight” literally means “second light” or “half light” (Wiktionary). According to Wiktionary, “twilight” is cognate “to Scots twa licht, twylicht, twielicht (“twilight”), Low German twilecht, twelecht (“twilight”), Dutch tweelicht (“twilight, dusk”), German Zwielicht (“twilight, dusk”)” (Wiktionary). So, even though we think this a special word in English, it is strongly connected to several other languages.

As we mentioned, “twilight” is connected to various cultural phenomena. In poetry, for instance, the word “twilight” is used often to imply something that is between waking or sleeping, alive or dead, and such. In the same sense, it is commonly employed in songs as well. Also, in terms of the media, “The Twilight Zone” is a classic American television series that explored that oddities of reality in parallel universes or happenings that might occur behind our backs. In this context, “twilight” is known more as something unknown and eerie. On the other hand, though critics despise it, the “Twilight” series (or saga, if you want to be fancy) written by American author Stephenie Meyer has its place in mass media. It is about a clan of relatively peaceful vampires, and how one of its members falls in love with a female human, despite wanting to feed on her at all times. The story continues with a love triangle involving a werewolf, and various battles, without much of a plot. Anyways, the term “twilight” in this respect might be reflective of the condition of the vampire who loves his human mate, despite wanting to do the worst to her. It is this in-between nature that draws parallels with the natural act of twilight. Unfortunately, this time-honored term has been tainted by this “saga,” as people naturally connect the word to this awful product of popular fiction (and even film series). But thankfully because of the lasting impact of “The Twilight Zone,” the term has not been completely soiled culturally.

The word “twilight” was a strangely spelled Old English word (at least by our current standards) and moved onto Middle English, and finally into Modern English with the same meaning throughout its history. One can get quite scientific about its meaning, as there are three different types of twilight in regard to the degree of the sun below the horizon. Also, “twilight” is reflected in poetry widely, was featured as an aesthetic in the television series “The Twilight Zone,” and was even sullied by the “Twilight” book series. Who knows what is next for “twilight” linguistically and culturally.

In a definition essay, you explain the meaning of a certain term by giving a detailed description of it, and support your definition with clear examples or facts. Such explanations are needed if a term is special, abstract, disputed, or does not have a c...
✕
Write with confidence at a college level