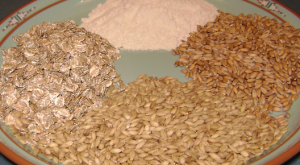 Gluten is often the scare of dieters. It is recommended almost universally to cut back on gluten and sugars when trying to lose weight. What is so fattening about them and what exactly is gluten anyway? Gluten is a type of protein found in many types of foods, but mostly those in grains. This substance makes sure these grains maintain their shape and holds food together. Glutens commonly are present in wheat, barley, rye, tritacle, and oats. In the following paragraphs, more detail will be given about the exact foods that has gluten and the components of this material.

Gluten in fact contains two types of proteins. According to Medical News Today, “The two main proteins in gluten are glutenin and gliadin. Gliadin is responsible for most of the negative health effects” (Adda Bjarnadottir, MS). Glutenin is responsible for dough elasticity, and is characterized by being of both high molecular weight and low molecular weight units (Anjum, F M, et al). Giladin, on the other hand, “…defines a group of proteins extracted from gluten by 70% ethanol. All fractions have remarkably low solubility in aqueous solution except at extreme pH (Elzoghby et al., 2012b). This low water solubility has been attributed to the presence of disulfide bonds and to the cooperative hydrophobic interactions, which cause the protein chains to assume a folded shape” (“Advances in Protein Chemistry and Structural Biology”). In other words, gliadin is the main component of gluten that makes bread rise.

The main food gluten is found in is wheat. This refers to foods such as breads, baked goods, soups, pasta, cereals, sauces, salad dressings, and roux (“What Is Gluten?”). Finding a way to avoid these is not easy, but it can be done. Wheat is a traditional food in most cultures, and getting away from these traditions takes the careful checking of food labels and vying for special choices.

The next most common place to find gluten is in barley. Barley is in malt (malted barley flour, malted milk and milkshakes, malt extract, malt syrup, malt flavoring, malt vinegar), food coloring, soups, beer, and Brewer’s Yeast (“What Is Gluten?”). These are a bit easier to avoid than types of wheat. However, variations of barley are found in many foods as well.

The third most common food that has gluten proteins is rye. Rye bread (for example, pumpernickel), rye beer, and cereals are usual choices for this substance (“What Is Gluten?”). Some countries eat more rye than others, but it is still a common group of gluten containers.

You may not have heard of triticale, but it is also another source of gluten. According to the Celiac Disease Foundation, “Triticale is a newer grain, specifically grown to have a similar quality as wheat, while being tolerant to a variety of growing conditions like rye. It can potentially be found in: breads, pasta, cereals” (“What Is Gluten?”). Basically, it is a laboratory-made hybrid of wheat and rye.

Lastly, oats have a presence of gluten. Pure oats are gluten-free, but in these modern times, they are usually in contact with gluten or contaminated in someway. Commonly, oats are grown side by side with wheat and rye. This proximity allows oats that we buy at supermarkets and grocery stores to contain gluten. When purchasing oats, you have to check whether they are gluten-free or not in order to be sure of their pure nature (“The Oat Conundrum: Are Oats Gluten-Free?”).

Gluten is a term that refers to an element in many foods that comprises two proteins: glutenin and gliadin. These proteins are linked to weight gain if consumed enough. However, they determine the elasticity and rising of grain, such as wheat, barley, rye, and more. Eating a gluten-free diet is difficult to achieve, so it is usually recommended to only cut down on eating foods with gluten in order to maintain a healthy weight.

Adda Bjarnadottir, MS. “Gluten: What Is It and Why Is It Bad for Some People?” Medical News Today, MediLexicon International, www.medicalnewstoday.com/articles/318606.php.

definition essay samples, what is gluten?
3.1/5