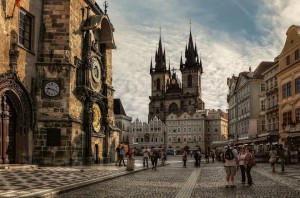 The history of Central Europe has fascinated me for several years, though I did not expect it to be as it was described in the books I read about it. You know how whenever an event you anticipate becomes reality, it never lives up to your expectations? When my friend suggested that we go to Central Europe on a summer vacation, I was prepared to be disappointed, even though I was excited about the endeavor. It turned out to be the opposite of my anticipations. Central European opulence and nobleness lingering in the atmosphere, and its architectural and historical allure went beyond my imagination. Out of all the cities and towns we visited in Central Europe, which included Vienna, Warsaw, Munich, Hamburg, Berlin, Budapest, and Krakow, the city that made the biggest impression on me was definitely Prague.

I do not know if it is the story behind the landmarks, stones and bridges, if it is the gorgeous majesty of façade detail of the incredible Gothic cathedrals, or the resplendence of the interior finery of the castles and cathedrals that left me speechless. But to this day, I have no doubt that there is no other city in the world that can compare to Prague. With its peculiar romantic scent, fresh youthfulness of the students, and picturesque city views, Prague to me is far more attractive than Paris, London, and New York combined.

My acquaintance with Prague began on a bus from Vienna, where I listened to a tour guide telling us the story of how the city was established. When we arrived in Prague, the first landmark we went to see right from our hotel, Hivan, was the Charles Bridge. With its foundation laid in 1357, this pedestrian bridge across Vltava was literally built on blood and eggs that were poured into the composite to hold bricks together, and it proved to be firmer than any cement mix at the time. Fascinated by this fact, we went on to examine the statues of saints on nearly every post of the bridge, while we listened to the story behind each of the figures.

There were many other elements of Prague that inspired and fascinated me: the beautiful and mysterious Loretta; the breathtaking and sublime Saint Vitus’ Cathedral; the eminent and enduring Church of Mother of God before Týn; the fantastic and dreamlike Dancing House; and the childishly bright and colorful Zlatá Ulika, where you feel like you are a part of a fairy tale. The whole of Prague is like a fairy tale of its own, with the millions of unbelievable stories running through its veins. But the event that made the significant impression on me was the sunset above Prague Castle.

The scenery was bewitching, dazzling, and breathtaking. The sun, barely reaching the sharp peaks of the Castle that pierced the peachy sky with soft billowy clouds; the shadows of the towers reflecting in the peaceful waters of Vltava; the slightly audible melody of violin and flute echoing in the air. The atmosphere caressed me into thinking that time had stopped—like I had traveled back in time to the medieval era.

We spent over three weeks in Central Europe, and just two days in Prague. But it seems like my memories of Prague have overshadowed the rest of the journey, taking up most of my emotions and feelings associated with this trip. Prague is worth composing laudatory odes and songs about—Prague is worth admiring, and most certainly, Prague is worth visiting again and again, as it has an ample history that you can unveil and discover every bit of and still be mystified.