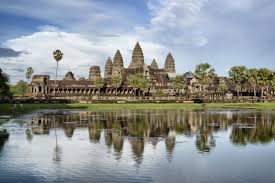 Each country in the world has contributed to the world’s cultural heritage. One of the most contributing parts of the world to cultural heritage is East Asia. Architectural, religious, musical, visual, and literary forms of art practiced by East Asian people had been greatly influenced by religious traditions practiced in the region—in particular, Hinduism and Buddhism. One of the most outstanding monuments ever created under the influence of these two paradigms was the temple complex of Angkor Wat in Cambodia.

The Angkor Wat complex is located in the northern province of Siem Reap. Its overall square is approximately 400-square kilometers; on it, numerous temples, basins, reservoirs, canals, and communication routes are located. Angkor Wat had been a center of the Khmer Kingdom; with its impressive monuments, urban plans, and a complicated system of canals, the site is an exemplar of Khmer architecture, closely linked to the geographical context, and possessing strong symbolic significance. In the Khmer Empire, it had a high level of social order and ranking. Therefore, Angkor Wat has a strong cultural, religious, and symbolic value, as well as aesthetic and artistic significance (UNESCO).

Angkor Wat is so vast that it is difficult to grasp its entire architectural plan if you are walking around the monument’s territory. From a distance, Angkor Wat looks like a colossal mass of stone, but if you get closer, you will see numerous elevated towers, chambers, and courtyards—all of them located on different levels, and connected with stairways and covered galleries. Angkor Wat’s central tower’s overall height is surprisingly greater than it might seem; it is 699 feet high, which is an amazing index for a building raised in ancient times, without modern cranes and other facilities. This had been achieved with three rectangular or square levels; each of them is progressively smaller and higher than the one below. Covered galleries with columns are located on the first and second levels, and on the third level there are five towers. Four of them are located in the monument’s corners, and the last one is standing in the center. These towers are of a conical shape, and are decorated with the ornament of lotuses (Tourism of Cambodia).

Moreover, the whole monument’s profile imitates a lotus bud. Surprisingly, you cannot see all the five towers at the same time—they are visible only when looking at the monument from certain angles, and if you look from the entrance, you will not be able to see them. The shape of a cross is dominant for the majority of structures and constructions located within the monument, such as courtyards, basins, and so on. The hallmark of Angkor Wat is a curved sloping roof of galleries, chambers, and aisles: from a distance, it looks like a series of long narrow ridges, which looks incredibly beautiful (Tourism of Cambodia).

Angkor Wat is an incredible monument of a civilization that has vanished ages ago. The monument, however, is still standing, reminding us of the greatest days of the Khmer Empire. This is a unique architectural complex, incredibly difficult in its plan and sophisticated in its execution. Therefore, this place is a must-see for any tourist heading to Southeast Asia.