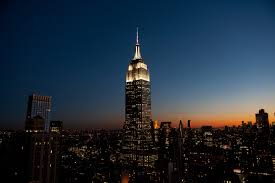 The United States was the first country to build skyscrapers. The amazing technology used to raise buildings that seemed to touch the sky has developed and improved, and now incredible skyscrapers of all shapes and configurations are one of America’s visit cards. However, there is one iconic building which, despite it being built almost a century ago, still remains one of America’s symbols. This is the Empire State Building.

Built in 1931, this skyscraper counts 102 floors, and its height is 1454 feet. Located in Manhattan, it occupies an area of around 208,879 m². Surprisingly, considering its size, the Empire State Building was raised only in 410 days with the effort of approximately 3,400 construction workers. What is even more surprising is that the skyscraper did not cost much to build (in relative prices); including the price of land, the estimated price of the project was $40,948,000—not too much for such a gigantic building even at those times, with the cost of the building itself only being $24,718,000.

The skyscraper is built in the architectural art deco style. This style was typical for the America of the 1930s, and the Empire State Building is a classical representative of this style, with all of its geometric forms, symmetrical patterns, and vivid, contrasted colors. The materials used in construction were also typical for art deco: steel, aluminium, granite, limestone, and concrete. Perhaps the most outstanding part of the building is its antenna of an unusual shape; it performs not only a decorative function, but also protects the building, serving as a lightning rod: annually, it is struck by lightning 23 times on average. It is said that the skyscraper’s developer, John Jakob Raskob, got the idea of a future building after pulling a pencil from his drawer. He held it up to the architect, William Lamb, and asked him, “Bill, how tall can you make it so that it won’t fall down?”

The Empire State Building was made from the most up-to-date construction technologies of its day. For example, for the skyscraper’s foundation, a substantial concrete base was used, which allowed to support the enormous weight of the steel framework of the building. For a framework, prefabricated steel sections was used; they were manufactured to exact sizes (within 2mm tolerance) and could be either bolted together, or joined with rivets. In particular, the hot riveting technique was borrowed from the shipbuilding industry, where it was used to join ships’ steel plates together. In the case of the Empire State Building, a steel rivet (yet plain) was first heated up to the maximum possible temperature, and then passed through the holes of steel sections that needed to be fastened. Through heating up, construction workers made rivets soft, and after passing them through holes, they had to use a rivet gun in order to make a rivet’s plain end round, and thus seal steel girders together. The resulted construction was incredibly strong; in July 1945, a B-25 bomber crashed into the Empire State Building’s 79th floor, however it reopened in only two days.

The Empire State Building is truly a magnificent example of architectural style, engineering genius, and the spirit of the American 1930s, when the luxury of art deco bordered with the poverty of the Great Depression. Although nowadays much more advanced technologies exist, and more impressive skyscrapers can be raised, the Empire State Building remains an icon of American architecture.