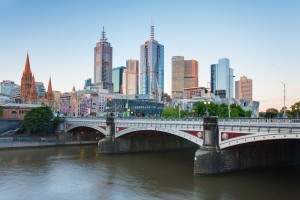 Australia is probably one of the most mysterious regions of the world—at least for people who have never been there before. A huge continent on the outskirts of the world, a place where it is cold during summer months and warm when it is winter; a place whose inhabitants “walk upside down”; a place where flora and fauna is exotic, dangerous, and unique—many species inhabiting Australia cannot be found anywhere else in the world. Australia is well suited for living—and at the same time, there are regions where no human being has ever set foot before.

Australia can offer a traveler a lot to see, both in terms of wild nature and urban life. And, speaking of the latter, perhaps one of the most interesting places to visit is the city of Melbourne: the second largest city on the continent.

Melbourne is located on the southeast part of Australia: at latitude 37 degrees 49 minutes south and longitude 144 degrees 58 minutes east. Melbourne’s metropolitan area covers 9990.5 square kilometers, and is inhabited by approximately 4.5 million people. The center of the city is represented by a business district; each of the other districts possesses its own purpose, functionality, character, communities living and working in them, and so on. Melbourne’s suburbs extend to more than 40 kilometers to the south of it. 30 kilometers to the east and 20 kilometers to the north lies the Dandenong Ranges National Park. To the west of Melbourne, vast basalt plains can be found. Annually, Melbourne is visited by over a million international visitors (City of Melbourne).

Melbourne is the capital of the state of Victoria, and was built on a coastal plain at the Port Phillip Bay, where the mouth of the Yarra River is located as well. Melbourne is considered Australia’s cultural center, and probably the most politically-conservative city in Australia. Walking around its streets, a tourist will eventually run into the buildings raised in Victorian style and modern high-tech skyscrapers; a number of art galleries, museums, and theaters; and extremely spacious parks and gardens. Melbourne hosts an enormous amount of all kinds of cultural (and not only cultural) events, and combined with an efficient transit system, it guarantees that a tourist will never feel the lack of action when staying in this city (melbourneaustralia.org).

Half a century ago, the American actress Ava Gardner who starred in the great 1960s movie “On the Beach” after Nevil Shute’s novel, proclaimed Melbourne to be the best place to film the end of the world. Presumably, there was not much to see in Melbourne back then, but since that time, a lot has changed, and now Melbourne is definitely one of the greatest and busiest cities on the planet. It can offer a tourist a number of attractions, arcades, places to eat and hang out at, as well as sporting facilities, including the Melbourne Cricket Ground and Flemington Racecourse; sometimes it seems that all the Melbourne’s townsmen are crazy about sports. Almost all of these attractions are located within the business center, or in its proximity—a walk or a short tram ride can deliver a tourist to any place worth visiting in Melbourne. Recently, the city’s docklands and the inner-city areas have been turned into residential areas, so now people of Melbourne can enjoy living in totally new districts (melbourne.com.au).

Along with the central districts, it is advisable to visit the Yarra River. Crossed with a number of bridges built in Victorian style, the river divides the city on the Central Business District and Southbank. There is much to see in this part of Melbourne: Royal Botanic Gardens, for example, or The Crown Entertainment Complex, which is the Southern Hemisphere’s biggest casino. To the south of the river, one can find a long (9 kilometers) green boulevard with English-style buildings along it: the St. Kilda Road. St. Kilda Bay, located at the end of the boulevard, once was a spooky place crowded by criminals, drug addicts, and prostitutes. But throughout the last 20 years, the Bay has turned into a remarkable and fashionable area with cake shops, boutiques, and other signs of civilization and well-being. To the north of the Central Business District, one can find Queen Victoria Market, Fitzroy Gardens, Flagstaff Gardens, and Treasury Gardens. Almost any place in Melbourne can be reached by a tram: the tramways system in the city is well organized and functions perfectly. There is even a restaurant on one of the city’s trams: it is an attraction for rich people (or at least for those who can afford paying $150-200 for food), but still a thing to see (melbourne.com.au).

Melbourne is considered to be the cultural center of Australia. The majority of its theaters, museums, galleries, and other remarkable places are located in the city center, or the Central Business District. However, it does not mean there is not much to see in Melbourne beyond the central district. Redesigned and revived industrial and old city areas turned into residential districts, picturesque banks of the Yarra River, spacious gardens, and other places of interest combined with an extreme density of cultural events make Melbourne a great city to visit for any tourist.