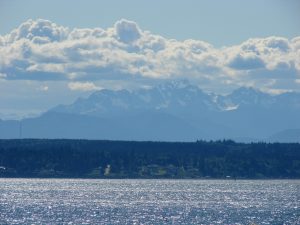 Richmond Beach was my spiritual hangout in my childhood. It is a rocky beach in the city of Richmond Beach, which can be accessed by a long downhill drive (by car or bicycle) from the city of Edmonds. Or, as I did often, took the 30-minute walk from my house to the calm waters through a tranquil stroll through the woods of Woodway. It used to be a place inhabited by Native Americans, but now it is occupied by mostly Caucasian people. However, a totem pole stands in tribute to the tribes that used to call the beach home. It has a vast property, with a beach, a playground, two upper lawns for the view and recreation, myriad “secret” trails along the clay hillsides, picnic areas, and a square where people can walk around, take an outdoor rinse-shower after a swim, and benches for the spectacular view.

With the sagebrush, chattering birds, train tracks, the croak of frogs, wind, herons, various shells, a cave along the beach, and a fantastic view of the Olympic Mountains, Richmond Beach is at once ordinary and extraordinary. Being there brings you into another state, in which you want to introspect, be calm, and be positive.

In high school, I was not a very social person. I did not have so many friends, and I did not feel like I belonged in a group most of the time. But when I went to Richmond Beach, these worries were left behind. It seemed like a mystical place to me, and in a way, it still does.

I would walk to various places on the beach: a secret cave in the clay hills on the left, the train tracks that lead all the way from Seattle to Chicago, the mass of sagebrush where the melody of birds made for a serene scene, and of course the beach itself, which was scattered with shells, tide pools, crabs, seals, driftwood, remnants of parties, and more.

The passing trains always attracted me there as well. My first word was “choo choo,” since the first three years of my life was near a train station in the Greenlake area of Seattle. So, I had a calling towards trains since my birth. Walking the tracks, I would meet interesting people, learn to know when trains were coming through the vibration and singing of the rails, and would be immersed in a world with a forest on one side and the Puget Sound and the other. This combination of forest and ocean was enchanting, and captured my imagination.

I wrote many poems about this place, and have been continually inspired by the atmosphere there. In fact, my poetry has developed largely at Richmond Beach. No where else have I written so many poems—except perhaps on public transport. I started writing lyrical and narrative poetry around 11 years of age, and have continued since. For the past few years, I have been writing almost exclusively haiku. A lot of my haiku is inspired by the nature of Richmond Beach, how I relate to it spiritually, and by the people who used to occupy that land—as I feel a special connection with Native Americans.

It seems that Richmond Beach is one of those places that no matter how bad you feel, you will leave feeling soothed and renewed. It is like therapy just to walk around, feel the ionic breeze of the Puget Sound, smell the seaweed and moisture, hear the variety of birds singing, listen to the crashing of moderate waves, witness the sailboats and other boats on the water, take in the Olympic mountains in all their glory, see people enjoying themselves on the beach, the whistle and trucking of a distant train, and feel the sand on the soles of your feet, melding into each other with each step. It is a whole therapeutic package.

It will be hard to ever forget Richmond Beach. It is now intertwined in my poetry, childhood, spiritual life, family life, romantic memories, and even the passing of my father, whose ashes was spread there. So, whenever I visit Richmond Beach, all of these elements rest in my mind and soul. There are other places that stir my imagination and supply me with sentimental rushes, but Richmond Beach is at the top of my list.