The Most Expensive Photograph Ever Sold 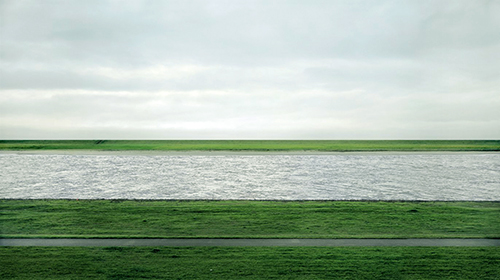 A long time has passed since photography was used to only record memorable events, and transformed into one of the most popular forms of visual art. And, as well as other forms of contemporary art nowadays, photography can be expensive to purchase, especially if it was taken by a famous photographer, and corresponds with the latest art trends. For now, the most expensive photo ever taken was estimated at 4.3 million dollars, in 1999, and was created by the German photographer Andreas Gursky. The photograph is named Rhein II, and apart from its incredible cost, it is a truly remarkable piece of contemporary art.

When looking at the photo, a spectator sees six stripes of grayish blue, green, and grey. From a certain distance, the photo might look like a painting of an abstractionist artist, something that perhaps Malevich or Rothko would paint; however, as you take a closer look, you can notice that the stripes are actually a sky, a river, grass, and asphalt. First comes the grayish-blue sky; after it, there is a narrow stripe of a farther shore, the river Rhine, and a green piece of a closer shore of the river, divided into two by the grey stripe of the asphalt track.

The size of the photograph is impressive: 73 x 143 inches, with an even larger frame around it; the photo is printed on acrylic glass. In 2011, it was sold to an anonymous buyer at Christie’s New York auction for the price of $4,338,500, which has made Rhein II the most expensive photograph ever sold.

It is interesting that the image on the photo is not how Rhine looks like in real life, or how it looked back in 1999, when Gursky took the photo. Gursky had to heavily retouch Rhein II using digital editing in various image processing programs; originally, the photo contained many superfluous details, such as people walking around the scene, buildings across the river, and so on. “Paradoxically, this view of the Rhine cannot be obtained in situ—a fictitious construction was required to provide an accurate image of a modern river,” said Andreas Gursky.

For those who do not value contemporary art much, Rhein II might seem like a regular photo; however, there are experts who can adequately estimate a piece of art, and are ready and willing to pay huge amounts of money to own it. This photo taken by Andreas Gursky is proof of it.