Although technological progress in the 21st century has enabled people to construct amazing buildings, it does not mean that in the past that people could raise less impressive structures. History knows many examples of incredible and unique architectural decisions: the Notre Dame cathedral, the Egyptian pyramids, the Eiffel Tower, and many others. Among them, the famous Taj Mahal should be mentioned without doubt. 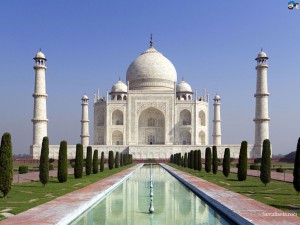 The Taj Mahal was constructed (or to be more accurate, ordered to be constructed) by the Indian ruler Shah Jahan in the 17th century. It is a mausoleum named after Mumtaz Mahal, the beloved lover of Shah Jahan, from materials including lapis lazuli, jade, crystal, amethyst, and so on. The building’s central dome is slightly more than 70 meters high, and is surrounded by four minarets. According to Islamic tradition, on the walls, there are verses from the Quran written in calligraphy. Inside the mausoleum, there is a false tomb of Mumtaz Mahal (also called a cenotaph), whereas the real sarcophagus with her remains lies at the garden level.

The Taj Mahal complex also includes a main gateway, a garden with pools of water, a red sandstone mosque, and an identical building called “jawab.” Shah Jahan wanted to build the second mausoleum across the river, as grandiose as the Taj Mahal, to have his own remains buried there. He also wanted the two mausoleums to be connected with bridges. But, unfortunately, these plans remained on paper.

Aurangzeb, Shah Jahan’s third son, deposed his father in 1658, and became the ruler of the country. Shah Jahan ended up under house arrest, locked up in a tower of the Red Fort at Agra. From there, he could see Taj Mahal. He rested in peace in 1666, and his body was buried next to Mumtaz Mahal.

Though almost everyone is familiar with the grandiose architecture of the Taj Mahal, not many know the intriguing history behind it. Though it stands in objective beauty, the Taj Mahal also resonates through history as a sight of mystery and love.