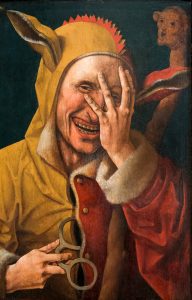 Possibly the funniest day of the year is April Fools’ Day. It happens on the first of April every year, and it comprises pranks and jokes on friends and family, and sometimes strangers. The phrase to use is “April Fools!” after you complete a prank or joke. But there is much more to this day than these common facts. There is a mysterious history of this celebration. There is no real consensus on when the holiday officially or unofficially began, but this essay will deal with all of the main theories.

The earliest possible mention of April Fools’ Day is in Geoffrey Chaucer’s The Canterbury Tales, written in 1392. In the story “Nun’s Priest’s Tale” it is mentioned that “Syn March bigan thritty dayes and two.” This seems like a jokey way of saying the first of April. However, modern scholars believe there was a misprint, and that Chaucer meant another date—specifically the anniversary of the engagement of King Richard II of England to Anne of Bohemia on the 2nd of May (“The Origin of April Fool’s Day”).

The next piece of evidence about April Fools’ Day comes from the French poet Eloy d’Amerval. He wrote about “poisson d’avril” which means “fish of April” (Amerval, Eliy d.). Some scholars say that April Fools’ Day started in the Middle Ages in Europe, where the New Year was celebrated on April 1st. Those who had New Year’s Day on January 1st made fun of those who partook in the celebration on April 1st by sending people fishes. In fact, January 1st was made the mark of the new year officially only in 1564 according to the Edict of Roussillon (“The Origin of April Fool’s Day”).

Speaking of another mention of April Fool’s Day, in 1539, the Flemish poet Eduard de Dene wrote a poem about a nobleman who made his servants go on “foolish errands” (“The Origin of April Fool’s Day”). In a similar region, in the Netherlands, the beginning of this day was initiated with the Dutch victory at Brielle in 1572 over the Spanish. The fool, in this case, was the defeated Spanish Duke Álvarez de Toledo. Yet, scholars do not know how to explain this event becoming an international holiday (Brielle).

There are also two other theories that relate to more ancient times. According to History.com, “Historians have also linked April Fools’ Day to festivals such as Hilaria, which was celebrated in ancient Rome at the end of March and involved people dressing up in disguises. There’s also speculation that April Fools’ Day was tied to the vernal equinox, or the first day of spring in the Northern Hemisphere, when Mother Nature fooled people with changing, unpredictable weather” (“April Fools’ Day”). As you can see, more and more theories crop up the greater you investigate this holiday.

Lastly, we come back to Great Britain. In 1686, writer and philosopher John Aubrey wrote about a celebration called “Fooles Holy Day.” Besides all the obscure references, it is certain that the celebration became popular through Great Britain in the 18th. According to History.com, “In Scotland, the tradition became a two-day event, starting with “hunting the gowk,” in which people were sent on phony errands (gowk is a word for cuckoo bird, a symbol for fool) and followed by Tailie Day, which involved pranks played on people’s derrieres, such as pinning fake tails or “kick me” signs on them” (“April Fools’ Day”). As time went on, and the celebration became more widespread, it became a one-day holiday.

As you might have noticed, April Fools’ Day has a confusing history. There are multiple theories about its origins. It variously started in Great Britain, the Netherlands, Italy, and many other places in Europe. It may or may not have been the mark of a new year, and it may or may not have been connected to the vernal equinox. One would have to be a fool to accept one theory.

“The Origin of April Fool’s Day.” Museum of Hoaxes, hoaxes.org/af_database/permalink/origin_of_april_fools_day/.