When is Art Not Art? 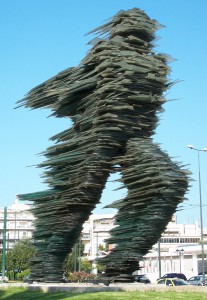 The definition of art is subjective, though famous art critics propose they know what “good” art is. What can we say about art, though, when galleries exhibit such sculptures as a Virgin Mary covered in cow dung, and it is being lauded? What is the border between art and an attempt at art? Questions such as these have been asked for thousands of years, and it seems these inquiries will never be answered objectively (Jorque, 131). One definition of art, however, has prevailed since its inception: it is what is pleasing to the senses. The word ‘pleasing’ can be misleading, as what is pleasing to one individual has the possibility of not being pleasing to another. Thus, it is what is pleasing to each individual—but this is still a vague definition, as it encompasses many concepts. Take for example, eating a great meal at a fancy restaurant. It is pleasing to the senses, but is this art? Some would state in the positive, specifically those adhering to the Neo Sense artist movement.

Even though this definition of art is subjective, it states how it affects individuals personally in a poignant way. Even if, say, an art admirer enjoys pondering over grotesque forms of art others might consider revolting, this is his or her sense of what is pleasant (Lorde, 23). What would not be art would be based on an individual’s concept of pleasing (Lorde, 18).

Thus, the art critic has no place in the Neo Sense movement in terms of the one-on-one assessment of art. “Good” and “bad” art is not in the equation when referring to it as solely being a phenomenon that pleases on an individual basis (Kiln, 16). This is not to say art critics are not necessary—they are expressing their own view of what pleases them or not, though their statements are not entirely substantiated.

What does this mean for the artist itself when adhering to the Neo Sense movement? It means the definition of pleasing is entirely up to them. However, artists cannot discount what has influenced them to think and feel in the way they do about how they appreciate one aesthetic over another (Kiln 89). What pleases someone is a combination of personal discovery and an absorption of what has pleased others (Klacsansky, 67).

The definition of art has never been easy to pin down. The Neo Sense movement may have happened upon a universal definition of it, though. As perceived by the movement, art is what pleases us personally, even if it means it may be horrid to others. Each person is a judge of art; each person is the only artist in the world. An artist makes what is art for him or her. It is a personal perception—no more, no less.