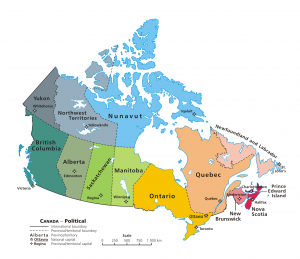 Canada is a revered country in the North American continent for its friendly people, peaceful politics, spectacular wildlife, and much more. However, for people who live outside this country (second largest in terms of area), the history of this nation may not be known or understood. In order to understand how Canada became the country it is now, an overview will be given.

Canada has gone through a long history before its Constitution was patriated in 1982. In fact, it begins with the pre-contact aboriginal timeline. According to Britannica.com, “North America’s first humans migrated from Asia, presumably over a now-submerged land bridge from Siberia to Alaska sometime about 12,000 years ago, during the last Ice Age; it has also been argued, however, that some people arrived earlier, possibly up to 60,000 years ago. Unknown numbers of people moved southward along the western edge of the North American ice cap. The presence of the ice, which for a time virtually covered Canada, makes it reasonable to assume that the southern reaches of North America were settled before Canada, and that the Inuit (Eskimo) who live in Canada’s Arctic regions today were the last of the aboriginal peoples to reach Canada” (Nicholson, Norman L., and Roger D. Hall). Before Europeans came, about 12 languages were developed by the natives of the land, and these languages were found in various cultures and tribes. Eventually, the Iroquois Confederacy was organized, which consisted of the Mohawk, Oneida, Onondaga, Cayuga, and Seneca peoples, and eventually the Tuscarora.

In these tribes, and throughout the Iroquois Confederacy, there was mixture of agriculture and hunting. Also, some groups had a high-level of political, religious, cultural, and trading organization. According to Britannica.com, “The one characteristic virtually all the groups in precontact Canada shared was that they were self-governing and politically independent” (Nicholson, Norman L., and Roger D. Hall). Though the eventual European explorers and invaders described the natives sometimes as savages, this was surmised out of ignorance.

The first European explorers of the Canadian region were Vikings from Iceland, where they came to Labrador and Newfoundland. There are still the remains of their settlements in these areas (Citizenship Canada). The natives and Vikings did not get along so well initially, although they eventually traded together, according to available evidence (Nicholson, Norman L., and Roger D. Hall). After the Vikings eventually fled the region, John Cabot (aka Giovanni Caboti), an Italian navigator came upon this land. According to the Canadian Encyclopedia, “Cabot and his crew were the second group of Europeans to reach what would become Canada, following Norse explorers around 1000 CE. Despite not yielding the trade route Cabot hoped for, the 1497 voyage provided England with a claim to North America and knowledge of an enormous new fishery” (“John Cabot”). Though the Northwest Passage was not found, a new part of the British fishing industry emerged from this voyage. It also initiated trade between the natives and Europeans, though they were suspicious of each other.

The first claiming of land in Canada was by the French. As stated by Canada.ca, “Between 1534 and 1542, Jacques Cartier made three voyages across the Atlantic, claiming the land for King Francis I of France. Cartier heard two captured guides speak the Iroquoian word kanata, meaning “village.” By the 1550s, the name of Canada began appearing on maps” (Citizenship Canada). After these voyages, the first French settlement was constructed. According to Britannica, “… the French king, anxious to challenge the claims of Spain in the New World, decided to set up a fortified settlement. Internal and European politics delayed the enterprise until 1541, when, under the command of Jean-François de La Rocque, sieur (lord) de Roberval, Cartier returned to Stadacona and founded Charlesbourg-Royal just northwest of Quebec” (Nicholson, Norman L., and Roger D. Hall). Though the French did not discover gems and other precious items in their new land, they still laid claim to the area that they “discovered.”

More French settlement activity continued in the name of competing with the Spanish. According to Britannica, “In 1604 the French navigator Samuel de Champlain, under Pierre du Gua, sieur de Monts, who had received a grant of the monopoly, led a group of settlers to Acadia. He chose as a site Dochet Island (Île Sainte-Croix) in the St. Croix River, on the present boundary between the United States and Canada. But the island proved unsuitable, and in 1605 the colony was moved across the Bay of Fundy to Port Royal (now Annapolis Royal, Nova Scotia)” (Nicholson, Norman L., and Roger D. Hall). Though the settlement was made as a fur trading post, its water systems (rivers) were too difficult to get through for the efficient delivery of goods. This settlement eventually moved, and they also got involved in allied warfare with the natives. According to Discover Canada, “In 1608 Champlain built a fortress at what is now Québec City. Champlain allied the colony with the Algonquin, Montagnais, and Huron, historic enemies of the Iroquois, a confederation of five (later six) First Nations who battled with the French settlements for a century. The French and the Iroquois made peace in 1701” (Citizenship Canada). Unlike in the United States, the settlers were more respectful towards the natives, and even fought for the rights of certain tribes.

In the subsequent years, England, the Netherlands, and also Scotland tried to claim parts of Canada as their own through trade and warfare. The natives also got more intertwined in the business of fur trade, and even fought among tribes for control over trade. Competition for the region was in trade, land, and religion, with Catholics, Jesuits, and Protestants all wanting to claim their own in this new land. More elaborate governments and alliances were created to manage the region with greater effect. With many countries vying for Canada at its new home, the British eventually made it a new part of its empire, with the French taking a smaller portion in its governing and influence. Since 1848, responsible government was in place by the British, but Britain still had power over the region until 1931, with the Statute of Westminster. It stated that Canada had the same rank as the United Kingdom. With this confirmation, it took several more decades until Canada created its own Constitution, in 1982. However, with Canada now being a parliamentary democracy and a constitutional monarchy, Queen Elizabeth II is still seen as the head of state (Nicholson, Norman L., and Roger D. Hall).

Many details could not be elaborated on in this small space, but I hope the progression of this great country was made clear. Canada was first populated by culturally, spiritually, religiously, and linguistically sophisticated people, with 12 languages and many tribes. The Vikings were the first Europeans to venture to the land of Canada but did not stay for long. Italian John Cabot, hired by Britain, explored the region, and initiated a fishing industry there. The French came soon after, claiming land as their own in the area of Quebec. After New France was founded, British, Dutch, and other settlers for various countries fought for the trade, land, and even religion of this new place. Alliances with the natives were made for trade and religion, and wars started to be fought under the banner of trade, religion, and land ownage. However, after many grueling battles between the French and British, Canada eventually came under the sway of the British Empire, and stayed so until the Canadian Constitution was patriated in 1982. From then on, Canada shook off the shackles of dependency on Britain, and has remained mostly economically and governmentally stable since.