Symptoms of the Ebola Virus 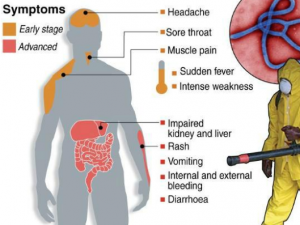 Currently, the world is facing an epidemic due to what is considered to be among the most dangerous viruses that humanity has ever faced: the Ebola hemorrhagic virus. Though there were announcements about experimental cures that were reported to be successful in terms of treating the virus, people around the world continue to die from Ebola. Though this virus is lethal, its symptoms are sometimes the same as less dangerous diseases, such as fever or flu. To settle anxiety about the spread of this virus, it is important to know what humanity currently deals with in terms of this epidemic.

Ebola was first discovered 1976 in Africa, on the banks of the Ebola river, after which the virus has been named. Back then, there were two major outbreaks of the virus, and this is how people learned about it. There exist several strains of the Ebola virus, some of them are deadly to people, and some are not.

The main symptoms of Ebola can appear in a period between the second and the 21st days of contamination, but usually it happens on the eighth through 10th day (CDC). Among the symptoms that appear in the first turn, one should mention fever and chills, strong headaches, pain in joints and muscles, and general weakness. These symptoms are not too different from those that people usually experience when catching a severe cold, or flu, so victims may even ignore these symptoms, or try to treat them as a common sickness. However, as the virus keeps progressing, a patient develops nausea with vomiting, diarrhea, chest and stomach pains, red eyes and rashes over the body, severe weight loss, and bleeding from almost all bodily orifices (Mayo Clinic).

The virus is usually transmitted either through blood or through waste. Contagion through blood usually takes place if a person consumes infested meat, or even touches it (for example, butchering can also lead to contamination). Also, there were cases when people got infected after stepping in feces of infected mammals, mostly bats (Mayo Clinic). The other ways of getting infected is through skin by receiving bodily fluids through pores.

Even though there is no specific cure from Ebola, doctors still try to treat it. In order to diagnose Ebola, doctors usually take tests on such diseases as cholera or malaria, because it is difficult to diagnose Ebola based solely on symptoms. After the diagnosis has been made, doctors start treating the symptoms, which includes eliminating infected cells, electrolytes, blood pressure medication, blood transfusions, oxygen therapy, and so on (WebMD).

Though Ebola is a highly dangerous disease, it is not likely that it will spread globally. It is most deadly in anti-sanitary conditions, which many African countries are notorious for. As for first world countries, even though there is still no universal cure, they are at much lesser risk than African countries. Though the symptoms of Ebola are severe and getting infected is not difficult, with the correct handling of an outbreak, the virus should not be able to spread.