The First Military Conflicts in History 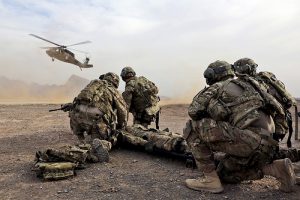 For almost as long as civilizations have been around, warfare has been present. It is not so easy to trace the exact beginnings of war, but we have recorded history that tells us the facts, and also artifacts that hint at what kind of military action took place. From archeological digs, specialists can discern that the first military campaign was executed around 9000 BC in ancient Jericho. The following paragraphs will explain what took place in this region and the subsequent history of military conflict.

Jericho is considered the first true city by many historians. Around 9000 BC, near the present-day West Bank, the Natufians settled. According to MilataryHistoryNow, “Made up of roughly 70 igloo-shaped mud brick dwellings that together housed up to 1,000 people, the city itself was surrounded by a 15-foot high stone wall nearly four feet thick at its base. While some speculate that this barrier might have been erected to keep the community safe from raiders, others believe it was used to protect the town from floodwaters. Despite the purpose of these fortifications, Jericho was ultimately abandoned following what archeologists believe was an invasion of some sort, presumably by an army of nomads or perhaps warriors from another city somewhere beyond the horizon” (“First Blood – History’s Earliest Recorded Military Conflicts”). However, there is no direct evidence of a battle or confrontation. There are hints of an invasion, but the exact kind of conflict was not identified. As a side note, bows and arrows were in use starting around 10,000 BC, and the cemeteries of Mesopotamia and Egypt display the effects of this weapon being employed (Mark, Joshua J.).

The oldest direct evidence of warfare starts with Hamoukar. Located in present-day Syria, the earliest settlement in the area dates back to about 5,000 BC. As stated by The New York Times, “The archaeologists reported finding collapsed mud-brick walls that had undergone heavy bombardment and ensuing fire. All around, they collected more than 1,200 oval-shaped “bullets” used with slings and some 120 larger round clay balls” (Wilford, John Noble). Therefore, more than just assumptions can be made about the site at Hamoukar, as compared to Jericho.

A big turning point, however, took place with the invention of writing. Civilizations began to record their wars. The first recorded war happened in Mesopotamia around 2700 BC between Sumer and Elam. According to the Ancient History Encyclopedia, “The Sumerians, under command of the King of Kish, Enembaragesi, defeated the Elamites in this war and, it is recorded, “carried away as spoils the weapons of Elam.” At approximately the same time as this campaign, King Gilgamesh of Uruk marched on his neighbors in order to procure cedar for construction of a temple. While it has been argued that Gilgamesh is a mythological character, the archaeological evidence of a historical King Enembaragesi, who is mentioned in the Epic of Gilgamesh, lends weight to the claim that the latter was also a real historical figure” (Mark, Joshua J.). These accounts were carved on stone tablets by scribes. In later wars in the same region, giant pictographs were created to display the records of bloodshed. As MilitaryHistoryNow statesm, “A more detailed account of another war, this time between competing Sumerian factions from the cities Lagash and Umma, circa 2525 BCE, was immortalized pictorially in a stone tablet. It supposedly shows the slain enemies of the Lagash ruler Eannatum being torn to pieces by vultures and lions. The carving, known as the Stele of Vultures, stands as the first recorded likenesses of ancient soldiers – helmeted and armoured spearmen arranged in tight formations being led by a figure in a chariot” (“First Blood – History’s Earliest Recorded Military Conflicts”). This is also the first visual evidence of the invention of the chariot, which became a key instrument in warfare in the ancient world.

As it can be seen, organized battles and wars have been waged perhaps since 10,000 BC, with the introduction of the bow. The indirect evidence starts around 9,000 BC in Jericho, where historians believed an invasion happened and that the inhabitants there put up a fight. Substantial direct evidence was found that dated back to about 5000 BC, where the site of Hamoukar was bombarded by bullet-like weapons. Finally, the written record of wars was initiated around 2,700 BC by scribes, describing the war between Sumer and Elam on stone tablets. Wars have been happening almost since the dawn of civilization, and it seems they will continue to be waged for millenia to come.