A World Young People Would Want to Live in 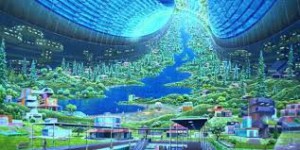 During recent years, many Hollywood movies dedicated to all kinds of utopian or dystopian future societies have been released; in literature, the dystopian genre has also become quite popular among adults and especially teenagers in the U.S. But what about the world that young people would like to live in?

According to recent studies by Dr. Alice Freidenhsrauer, the majority of young people connect the future world with the intense development of technologies (FaResearch.net) Usually, they describe their perfect version of the future as a world where Internet-based technologies are integrated in daily life so much that there is no perceived difference between virtual reality and the real world. For example, Dr. Freidenhsrauer gives an example of Tony Herbenson, a 19-year-old student from Silverton College of Arts, who described the future he would like to live in as a place where technologies have become as natural as speech or sight; Tony suggested that in the future, people will implant certain gadgets in their bodies—for example, communication devices, which allow the immediate access to the Internet, or to virtual (enhanced) reality, and so on. This reminds of the ideas of transhumanists, who believe that merging technologies with the human body would be a natural stage of evolution for humankind.

Another research study conducted by the IFR Institute showed that among people between 16 and 26 years old said that one of the crucial components of the perfect world they would like to live in is peace and welfare. By peace, the respondents meant the absence of wars—either global or local, and by welfare they implied mostly health. After the recent media panic around Ebola, many young people consider health safety to be crucial for well-being, rather than money or success. Young people hope scientists will soon manage to find cures for such major diseases as cancer, HIV, and Ebola. Also, young people expect humanity to solve the problem of hunger and overpopulation.

Recent studies in Silverton, co-conducted by the SAN Institute in 2013, show the perfect world for young people is impossible without having solved ecological problems. Global warming seems to be the problem that worries young middle-class Americans significantly; about 34% of respondents believe the current ecological situation affects their health and mental condition directly; 40% think bad ecology might have a connection to certain causes of sickness they had in the past, or have now. Only 10% of respondents do not believe ecology affects them in any way. So, “a clear sky above the head” is also a part of how young people see a perfect world.

The idea of a perfect world is not new; recently, it has become rather popular in cinema and literature. At the same time, young people have their own set of images and requirements towards the future. They include expectations for advanced communication technologies to become an integral part of everyday life; curing major diseases and solving such problems as hunger and overpopulation; and the end to global warming. Therefore, we may imply that the vision of modern young Americans reflects the existing social tendencies rather accurately.