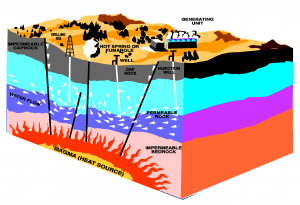 Geothermal energy comes from the heart of Earth. In this way, it is a natural, clean, and renewable resource. Since it has these properties, it is being employed around the world in major countries, and even underdeveloped nations. It is a resource that is often considered instead of gas, oil, coal, and other sources of energy. To learn more about this significant form of energy, the following paragraphs will explore its properties, its power sources, its production, and more.

For about 4.5 billion years, heat has been radiating from the center of Earth at 6437.4 km deep. The temperatures down there are close to being as hot as the sun’s surface, which equate to 5,500°C. At this moment, around 42 million megawatts are being conducted by Earth’s core. The best news about all this is that this energy is inexhaustible, as the only thing that can make this energy nonrenewable is to destroy planet Earth entirely (“Geothermal Basics”). In turn, we have countless geothermal reservoirs. According to the Geothermal Energy Association, “Rainwater and snowmelt feed underground thermal aquifers. When hot water or steam is trapped in cracks and pores under a layer of impermeable rock, it forms a geothermal reservoir” (“Geothermal Basics”). However, these are natural ways of creating geothermal energy. Humankind has developed ways to extract geothermal energy artificially.

Various geothermal energy plants have been created to sustain a consistent flow of this power source. According to the Geothermal Energy Association, “After careful exploration and analysis, wells are drilled to bring geothermal energy to the surface, where it is converted into electricity” (“Geothermal Basics”). In addition, with “…a geothermal flash power plant, high pressure separates steam from water in a “steam separator” as the water rises and as pressure drops. The steam is delivered to the turbine, and the turbine then powers a generator. The liquid is reinjected into the reservoir” (“Geothermal Basics”). Another type of plant is based on dry steam, where “steam alone is produced directly from the geothermal reservoir and is used to run the turbines that power the generator” (“Geothermal Basics”). Binary plants are a bit more complicated, as they employ “an Organic Rankine Cycle system, which uses geothermal water to heat a second liquid that boils at a lower temperature than water, such as isobutane or pentafluoropropane. A heat exchanger separates the water from the working fluid while transferring the heat energy. When the working fluid vaporizes, the force of the expanding vapor, like steam, turns the turbines that power the generators” (“Geothermal Basics”. And like most other geothermal plants, “The geothermal water is then reinjected in a closed loop, separating it from groundwater sources and lowering emission rates further” (“Geothermal Basics”).

These plants might seem far from our households, however they can be used directly in our homes. Based on information from the website Renewable Energy World, “A geothermal heat pump system consists of a heat pump, an air delivery system (ductwork), and a heat exchanger-a system of pipes buried in the shallow ground near the building. In the winter, the heat pump removes heat from the heat exchanger and pumps it into the indoor air delivery system. In the summer, the process is reversed, and the heat pump moves heat from the indoor air into the heat exchanger” (“Geothermal Energy”). Therefore, we do not have only industrial uses for geothermal energy, but also commonplace applications. For centuries and perhaps thousands of years, people have been employing makeshift and mechanized systems to tap into geothermal energy to heat their homes, cook food, bathe, and other activities.

As we can see, geothermal energy is a powerful tool in the hands of humans. It is a renewable energy that has been radiating for over 4 billion years from the center of Earth. To understand the magnitude at which the core of Earth is burning is difficult, though it is comparable to the temperature of the Sun’s surface. Anyways, though there are many natural forms of geothermal energy (hot springs, geysers, and such), people have found ways to extract power from geothermal energy through the use of various power plants. Besides companies garnering power from these plants, people can employ geothermal pumps close to their homes in order to gain heat and temperature regulation for myriad uses. Geothermal energy is a clean, natural, and dependable source of power we should consider taking advantage more in our current climate crisis.