The Genius of Stephen Hawking 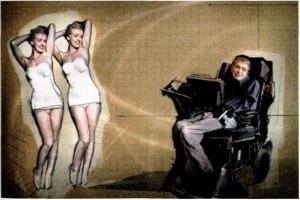 Astronomy (and astrophysics) has been continually connected directly to the world’s mysteries that have intrigued humanity throughout history. Before the advent of modern physics, people were offered dogmatic religious explanations of the Universe’s structure; however, such scientists as Galileo and Newton had completely changed the way the world had usually been perceived. Since their discoveries were made, the picture of the world we live in became more complicated, so that today it can be almost entirely understood perhaps only by scientists. Fortunately, there are people who make knowledge about the Universe accessible for everybody who wants to learn more about it. Such people are geniuses, as they often manage to explain phenomenally-difficult concepts in accessible language; one such person is Stephen Hawking—a great scientist and a gregarious personality.

Stephen Hawking, a mastermind in physics, astrophysics, and other complicated branches of science that I have only a faint of an idea about, was born in 1942. Surprisingly, at school the future genius had not been a brilliant student—his academic successes back then were rather mediocre (HowStuffWorks). However, when it came to entering a university, young Hawking had displayed a perfect score in physics, which had won him an Oxford scholarship. University professors had also recognized him as an non-diligent student; however, he received a first-class honors degree at Oxford, and started his graduate work in Cambridge (Special Education Degrees).

As a student, despite of being a member of the rowing team in Oxford, Hawking experienced increasing clumsiness and problems with controlling his body. Those were the first symptoms of a disease that later would change his life—amyotrophic lateral sclerosis—which has made him almost completely paralyzed. Despite all the difficulties the disease has caused him, Hawking has not given up; moreover, throughout his life, he did more than a regular healthy person would do.

What is the most fascinating aspect about Stephen Hawking is his will power. Honestly, how many people would have not given up if they were diagnosed with ALS? However, Hawking not only continued his scientific work (despite being given just a few years to live when he was 21), but accomplished a number of great tasks, and made an invaluable contribution to science. Stephen Hawking wrote a number of world-famous books, which is already remarkable for a person who can only communicate with others with the help of a voice modulator. Besides, these books are dedicated to the most complicated problems that science (cosmology, in particular) has ever faced; however, Hawking managed to explain them (or at least bring the readers up to date) in simple words, with his own style and sophisticated humor.

Stephen Hawking, regardless of his circumstances, manages to live a more fulfilled life than people usually do. He is the director of research at the Cambridge Center for Theoretical Cosmology. He is the author of numerous innovative theories. He has floated in zero gravity and hopes to fly into space (Biography.com). He is a married man and a father. But most of all, he is a scientist recognized worldwide. He has refuted the image of a scientist as a bookworm delved into calculations and formulas; on the contrary, his personality, humor, books, and participation in different popular projects, such as “The Simpsons” (where he acted as himself) or “Into the Universe with Stephen Hawking,” have shown the world that science can be popular.