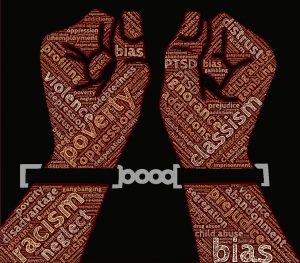 Racism is common in every country of the world, even if those countries’ governments are not willing to admit it. It is known that racism is a nurtured quality rather than an inherent property of people. Therefore, it is intriguing to investigate why people become racist or have racist tendencies. Racism usually stems from fear, a desire to be a part of group, and one’s upbringing.

Sometimes, racism appears due to a fear of the unknown. Many people are racist towards African-Americans because they have not met any, or have not gotten close to any in terms of a friendship. A Caucasian person might go through his or her whole life without becoming friends with an African-American, and thus, they believe what is said negatively about this group of people on the news and from other sources. According to the results of a study by New York University and Harvard University, “although racial prejudice is learnt, everybody has an inbuilt inclination towards learning to fear people who appear different. If a white person is robbed by a white mugger, for example, he will not readily develop an instinctive fear of other white people. If his assailant is black, however, he is more likely to become wary of black people in general. The effect can be broken down by positive exposure to people of different races. Both white and black people who have dated people from other ethnic groups lose their predisposition to learn to fear them, research showed” (Henderson, Mark). So, though fear of other racial groups can be developed, it can also be undone through building relationships with those factions of people.

Each person desires to be included in a group of sorts. Often, within these groups, certain people are perceived as “good” or “bad,” or different epithets. Those who are inside the group are seen as friends, and sometimes those outside the group are perceived as enemies. Dr. John Paul Garrison explains that, “The us-versus-them mentality makes them feel closer to the group they identify with, which provides social support. That is a severely perverted version of healthy social support, but the longing to identify with and be close to others is a healthy desire” (Abrams, Allison). It sounds like an oxymoron, but hate is used to garner love in the case of racism.

Children repeat what their parents say and do, and the acquiring of racism is no different. Attitudes, the way people speak, what actions they take in certain circumstances, depend largely on what they were taught as a child. Of course, one can step away from these habits, but it is not so easy. Renowned Harvard University researcher Mahzarin Banaji has done studies on children and racism. He notes that, “where racism and other prejudice are concerned, is that we had far over-calculated how long it takes for these traits to become imbedded in a child’s brain. It’s quite shocking really, but the gist of it is that 3- and 4-year-olds demonstrate the same level and type of bias as adults. This tells us that children ‘get it’ very, very quickly, and that it doesn’t require a mature level of cognition to form negative biases” (The Boston Globe). Thus, children learn racism quicker than we might expect. As parents, we have to be careful what we say, and wary of who are children are around.

Racism is an ancient phenomenon that is still prevalent, despite advances in rights, attitudes, and standards of living. This psychological disorder comes about commonly through the fear of people, a desire to be an integral part of a group, and from upbringing. Though many freedom fighters and activists have tried to conquer racism and to dispel it, it continues in the minds of people. The end of racism unfortunately does not seem to be a plausible occurence in our current world.

Henderson, Mark. “Racism Is Learnt from Fear of the Unknown.” The Times, The Times, 29 July 2005, www.thetimes.co.uk/article/racism-is-learnt-from-fear-of-the-unknown-bxj7skfsqxd.