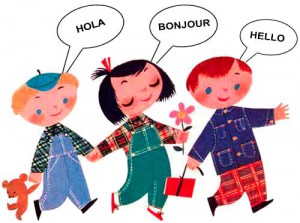 Learning new languages is considered an investment in one’s success. There are examples of folklore sayings, such as, “You are as many times a man, as many languages you speak” (Slavic proverb), or that “You live as many lives as many languages you know” (Czech folk song). These days, such opinions can be considered truer than ever. It is not just diplomats and interpreters who are obliged to learn languages. In the twenty-first century, the process of globalization has expanded further than ever, and people all over the world are becoming more interconnected. Whether one is working for a big international corporation, or frequently travels abroad for leisure, enjoys watching foreign movies with the original soundtrack, or simply want to widen one’s horizons, learning a second or third language is a wonderful decision.

However, while most of the developing world is keen on learning more than just the native language of their home country, Americans tend to skip this part of education, or learn foreign languages rather perfunctorily. David Ricker, Professor in Linguistics at the University of Maine, having conducted a country-wide research on the issue, reported that only 17.8% of adult Americans, across the country, can fluently speak, and correctly write, in one or more foreign language (Ricker 22). This number is extremely low for a developed society. To put this into perspective, 86.1% of Germans, 74% of Swedes, and 59.6% of Russians are fluent in at least one foreign language. This number is even higher among some of the population in Asia.

While Americans also have Spanish, German, French, and Japanese classes in their high school and college curricula, the quality of knowledge that American children and teenagers receive is considerably lower. One of the major reasons that researchers cite is the lack of motivation. While the rest of the world finds it a necessity to know a couple of other languages other than a native one, many Americans see no point in learning any other language since, in most cases, their English will be understood anyway whenever they travel (Sallck 28). We all realize that English is unofficially the modern-day international and business language, but it does not mean that Americans should use this advantage against themselves.

Learning languages at an early age is beneficial for several reasons. It aids a child to effectively develop their organs of articulation and speak more clearly, including in their native tongue (Jess 32). Learning another language means widening one’s mental outlook, and becoming more adept and knowledgeable about the world’s cultures and perspectives. In addition, learning a language greatly contributes to general brain development, especially at an early age, but also at any age. It helps make our minds more flexible, our articulation more adaptable, and our memory more retentive (Sallck, 29).

Furthermore, taking into consideration the specifics of American society, it would only be logical that Americans should speak more than one language. With the United States being a melting pot of cultures, nationalities, and ethnicities, being diverse in every way they can is what being an American is about (Prestan 12). Americans are interested in other cultures, cuisines, and costumes, but do not show any particular attention to the folklore, songs, and languages of the people whose national restaurants they frequently visit. If we also reminded ourselves how much Americans travel, including travelling abroad, it is surely a shame that so few people in the United States know and speak a language other than English. Identifying yourself not just as a citizen of the United States of America, but also as a world inhabitant together with the Chinese, Russians, French, and Nigerians means broadening one’s perspective and integrating into the global social medium.

Depriving American children and teenagers from learning another language automatically means neglecting their future development. Creating favorable conditions for learning languages at schools, and stimulating children’s motivation towards it is investing in the future of our children’s overall success. Showing interest in another culture, language, and tradition does not in any way mean withdrawing from your own background. Quite the contrary, it shows one’s respect and tolerance, intelligence, and refinement. I see no reason why American society should be at the tail position when it comes to speaking foreign languages. Inspiring American children to be interested and motivated them learn languages is what both the educational institutions and parents should focus on.