The Chemistry of Love 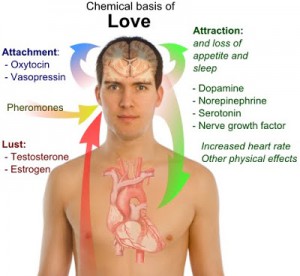 Love has been referred to as a sublime feeling as long as written literature has existed. Poets, philosophers, artists, and other representatives of creative professions sought for its origins, reasons, and recipes. However, in the 21st century, people have become pragmatic enough to assume that love might have more grounded, biological origins. Technological progress has allowed scientists to research this issue and provide valid arguments in favor of the theory that claims love is much (not totally though) about “simple” chemistry.

According to Dr. Helen Fisher, an anthropologist at Rutgers University, love as a holistic system can be divided into three basic subsystems, each with its own functional tasks and roles: sex drive, romantic love, and attachment. Sex drive is necessary to make a person start looking for partners; romantic love appears to help a person hold focus on one specific partner; attachment is crucial for building a long-lasting and reliable relationship with a selected partner (Chemistry.com).

Each of these subsystems need a driving force to operate and impact an individual’s behavior. Even though a loving relationship is a lot about psychology, it is still fueled by hormones; this is why using the expression “love chemistry” is fully justified. For the sex drive subsystem, testosterone and estrogen are crucial; the romantic love stage, or attraction, is “driven” mostly by dopamine and serotonin; attachment is sustained by such hormones as oxytocin and vasopressin (BBC Science).

Testosterone and estrogen are respectively male and female sex hormones that are responsible for sex-related physiological reactions, lust, and the motivation to look for a partner. Testosterone and estrogen cause sex drive to be present; however, specialists admit that sex can give a start to romance, as it increases the influx of dopamine to the brain (Chemistry.com). Dopamine and serotonin are hormones that cause euphoria and good mood; the same hormones are also secreted after taking certain drugs, so this is why one can be “high” from the feeling of love, act impulsively, and “get stuck” on the person they fell in love with. In its turn, attachment—as the most long-lasting phase of a love relationship—is driven by the same hormones that are responsible, in particular, for mother-and-child bonds (oxytocin); this hormone is also believed to be secreted when the two partners get intimate. So, a serious relationship is more about care and tenderness, than romance and turbulent feelings.

The popular expression “love chemistry” should be understood literally. Along with natural psychological processes, love is also, to a significant extent, dependent on the hormones secreted by our bodies during various stages of a relationship’s development. Sex drive, which makes us look for new partners (if we do not have one already), is regulated by the hormones of testosterone and estrogen. During moments of intimacy, the brain is affected by dopamine and serotonin—the hormones that are responsible for all the symptoms of romantic love, such as euphoria, concentration on the object of love, impulsiveness, and so on. As a relationship develops, it becomes reinforced by the hormones oxytocin and vasopressin; oxytocin, in particular, is the same hormone that is responsible for the forming of mother-and-child bonds. Thus, despite the claims that love is purely a solemn and sublime feeling, it also has a lot to do about biology and chemistry.