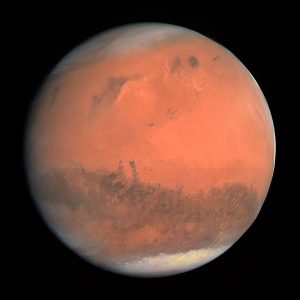 Mars is featured in countless science-fiction books, non-fiction books, cartoons, films, and more. However, how much do we know about the Red Planet? I would say that the average person only has a cursory knowledge of this important part of our solar system. Therefore, I will do justice to this planet by providing details about it so that the mystery of Mars can be deshrouded. I will go over its technical information, such as its general description, internal structure, surface geology, soil, hydrology, geography, atmosphere, climate, orbit, and habitability.

Mars is the fourth planet from the Sun in our solar system. It is also the second-smallest planet in our solar system. By diameter, Mars is half as small as Earth, and is also less dense than Earth (Williams, David R.). Mars is named after the Roman god of war, and is often called the “Red Planet” (Zubrin, Robert; Wagner, Richard ).

Similar to Earth, Mars has a dense metallic core with less dense material surrounding it (Nimmo, Francis; Tanaka, Ken). Its core has a radius of approximately 1,794 ± 65 kilometers (1,115 ± 40 mi), mostly comprising of iron and nickel, with a bit of sulfur (Rivoldini, A., et al.). By estimates, the core is about twice as rich in lighter material than Earth (Jacqué, Dave). Though dormant, there is a silicate mantle that overlays the core, which created the tectonic plates on the planet.

The surface geology of Mars is similar to Earth, with some nuances. Like Earth, Mars is a terrestrial planet, meaning that its surface is mostly composed of minerals, oxygen, metals and other substances that comprise rock. The main material the surface of Mars is made of is tholeiitic basalt (McSween, Harry Y, et al.), and most of the surface is covered in granulated iron oxide dust (Christensen, Philip R.,et al.).

Martian soil is slightly alkaline and has traces of magnesium, sodium, potassium, and chlorine. These are elements found on Earth and are employed for the growth of vegetation (BBC News). In addition, the soil on Mars has a pH of 7.7, and has 0.6% of salt perchlorate (Chang, Alicia).

Because of atmospheric pressure, unfortunately liquid water cannot exist on the Red Planet (NASA). There are two polar ice caps on Mars, which are mostly composed of water. Ice water is hypothesized to be trapped within the cryosphere of the planet (ESA). However, there is evidence that liquid water once existed on Mars, and that there could be liquid water in the future (“Mineral in Mars ‘Berries’ Adds to Water Story”).

In 1810, the first maps of Mars’ geography was made by Johann Heinrich Mädler, which synthesized ten years of observations. The markings on the original map were only single letters as abbreviations for full names (Sheehan, William). Currently, many languages and names accompany maps of Mars, with the general features of Mars described by classical mythology, craters being named after deceased scientists, and even towns and cities. Valleys are either named after “Mars” or “star” in numerous languages, or named after rivers (Planetary Names).

Let us look into its atmosphere. Approximately, four billion years ago, Mars lost its magnetosphere most likely because of asteroid strikes (Wired). Due to this, solar winds directly influence the planet’s ionosphere, which lowers atmospheric density. In terms of percentages, 96% of it is carbon dioxide, 1.9% argon, 1.8% nitrogen, with very little oxygen and water (Williams, David R.).

Mars is often called a sister planet to Earth because of its climate, which has Earth-like seasons. This similarity is due to the tilts of both planets on their rotational axes. However, the lengths of the seasons on Mars are twice as long, because Mars is a greater distance from the Sun than Earth. Though Mars has extreme low temperatures, it has also has a degree of comfortable temperatures for human life. However, Mars has the largest dust storms in the galaxy, so living on Mars would not be that easy (Discover Magazine).

The most pressing question about Mars is whether or not it is habitable. According to The Planetary Society, “Long-term habitation on Mars will require us to master the conversion of raw Martian materials into resources we can use to survive. Fortunately, Mars has a wealth of these materials, making it arguably the most human-habitable place in the solar system, other than the Earth itself” (The Planetary Society Blog). The aspects of Mars that seems appealing to scientists in terms of its habitability is “atmospheric CO2, atmospheric N2 and argon, H2O from the atmosphere and polar ice, perchlorates in the regolith, nitrates in the regolith, basaltic rocks, and fluorine” (The Planetary Society Blog).

With this technical information in mind, we can see Mars with a much clearer mind. We can understand why Mars is favored as the next place for humans to live: it has similar seasons, it has an untapped potential in the form of ice water, and with the right technology, we can live there unperturbed. Within the next 50 years, it may be possible that the first colonies on the Red Planet will crop up.

“Is Mars Habitable? With the Right Technologies, Yes.” The Planetary Society Blog, www.planetary.org/blogs/guest-blogs/2017/20170921-mars-isru-tech.html.