Who Says Michelangelo Was Right? Conflicting Visions of the Past in Early Modern Prints 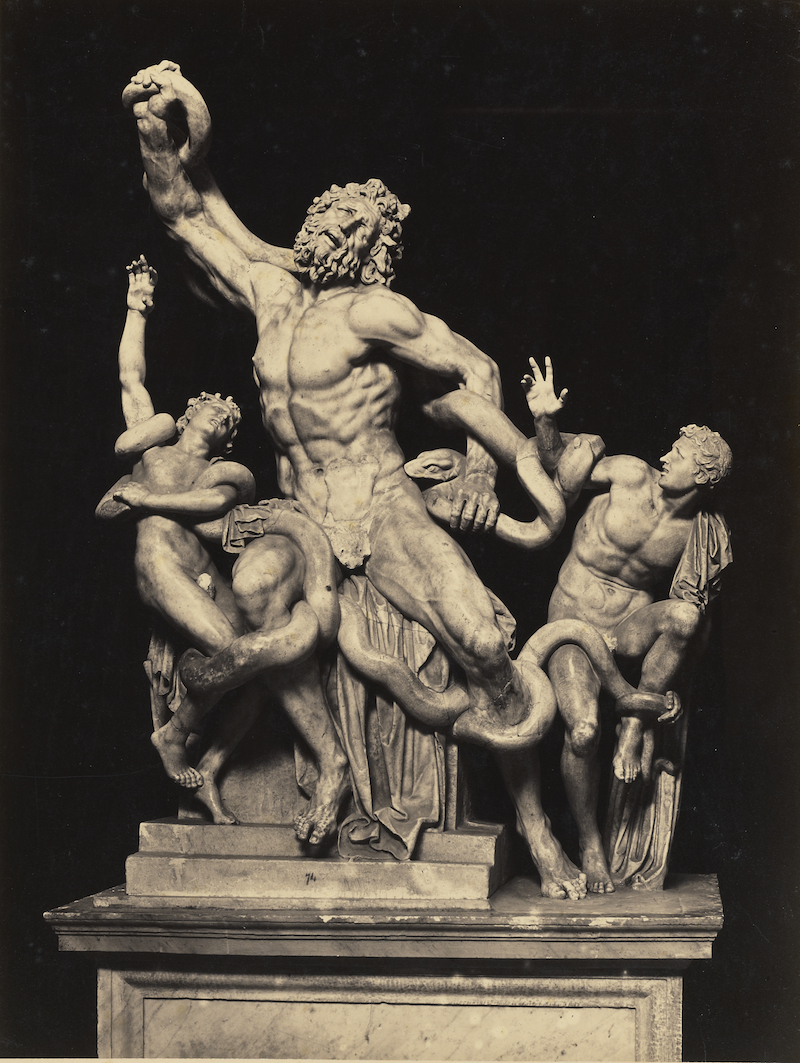 Rome, 1506. A Vatican envoy races across the Renaissance city to the home of Giuliano da Sangallo, Pope Julius II’s architect. Something wonderful has been found on the Esquiline Hill. Soon after Sangallo, his son Francesco, and his close friend Michelangelo—who was at the Sangallo home as usual—are lowered into the ground to another world. The Roman Emperor Titus’ palace, believed to have been built over the infamous Golden House of Nero for which Rome (supposedly) burnt, had been found beneath the vineyard of Felice de’ Freddi. Peeking out from the now-underground palace was the Laocoön and His Sons. This monumental sculpture of the Trojan priest and his children, killed by Poseidon’s sea serpents for prophesying the city’s destruction by the Trojan Horse, had been lost to sight since the fall of the Roman Empire. But this had not prevented its fame from burning as brightly in the early modern period as it had in the ancient city. One of the works praised in Pliny the Elder’s first-century treatise Natural History, the Laocoön was among the revered lost treasures of Rome. And now it had been returned to the city and its artists. There was only one problem: the Laocoön was broken. But the Vatican could see to that.

At a time when a farmer could be tilling a vineyard and reveal an imperial palace, the lines between the ancient and the modern city were not definitively drawn in Rome. The same could be said of its art. Rome attracted thousands of artists, as eager to scour Pliny’s Natural History and the city’s antiquity galleries for inspiration as they were to learn the latest techniques from the leading court artists. And so when a work such as the Laocoön was found to be missing arms and sections of snake, and with one son detached, it was only natural that one of the pope’s favored artists should complete it. After all, the pope was the guardian of the city, and his artists were the inheritors of the Roman tradition. In the same way that an apprentice would show the depth of his understanding by finishing the background of the master’s painting, so Rome’s modern artists would express respect for their ancient predecessors by restoring their work “maniera all’antico” (“in the ancient style”), as Giorgio Vasari was later to praise the Laocoön restoration in his Lives of the Artists. And perhaps with just a little of their own individuality, so that the much-desired affinity with antiquity could also add to their own status. But the question in 1506 was, who among Rome’s artists would be entrusted with the commission?

Pope Julius II had amassed a court of the most celebrated artists of the day. Having promptly purchased the Laocoön from de’ Freddi and placed it in the Belvedere courtyard, the Pope had his pick of masters to complete the sculpture. The work remained fragmentary until 1510, when the elderly architect Donato Bramante challenged the leading masters to come up with the best solution for the damaged Laocoön. Raphael, a distant relative of Bramante, was elected as the judge. In a few short years, the young artist from Urbino had established himself as the infant terrible of Rome’s art scene. Having goaded the formerly pre-eminent Michelangelo by winning papal favor and sneaking into his as-yet unfinished Sistine Chapel, Raphael further insulted his Florentine rival in the Laocoön competition.

Ignoring Michelangelo’s argument that Laocoön’s right arm was turned back in anguish, Raphael instead declared Jacopo Sansovino the winner. His version, in which the priest’s arm extends upwards to create a dramatic diagonal composition, was implemented in a series of restorations in 1520-1540. This Renaissance-revised Laocoön enjoyed an impeccable heritage of papal patronage and leading artists’ deliberation. It was the standard vision of the sculpture until the twentieth century when, in an historical twist of fate, an antique backward-bent arm was discovered in a Roman workshop in 1906. Affirmation in 1942 that the fragment belonged to the Laocoön, and the subsequent decision to reaffix it to the sculpture, posthumously vindicated Michelangelo’s argument long after even he had come to agree with Sansovino’s composition. This popularity of Sansovino’s version did not signify, however, that everyone else approved.

At the same time as the Laocoön was unearthed and became the talk of Rome, the engraver Hans Brosamer was born in the German city of Fulda. Brosamer never traveled to Rome, so he could not participate in the ongoing debate about the Laocoön’s restoration or even see the work for himself. This did not prevent him from forwarding his own interpretation of the sculpture that flooded Europe’s visual culture through reproductive prints and miniatures. In response, in 1538 Brosamer created the tiny engraving Laocoön Troia.

In the center stands Laocoön, his face upturned in anguish as in the Vatican sculpture, while sea serpents bind his limbs and those of his sons. In case the viewer remained in any doubt that Brosamer intended to depict the recently discovered sculpture, behind this scene of agony can be seen imagined Roman buildings. Their embellishments include a Pegasus capital very similar to those from the Augustan Temple of Mars Ultor, and famously illustrated in Sebastiano Serlio’s architectural treatise Tutte l’Opere d’Architettura, et Prospetiva (All the Works of Architecture, and of Perspective). Brosamer is closely aligning his sculpturally-modeled Laocoön with that being debated over in Rome. Yet Brosamer’s image has not followed the restoration dictated by the Italian architects. Some elements, such as the smaller serpents in slightly different positions, could be regarded as minor differences of interpretation from one print to the next. However, Brosamer has taken this further, and dramatically revised the composition.

Freed from the practicalities of the actual stone, Brosamer rearranged and elaborated the fragments. The resulting image expresses his own understanding of how a statue of the Trojan priest should look. The son on the right, whose missing arm had been restored to be raised in fear, now holds his father instead. The other son has been detached from the composition and turned ninety degrees to struggle with the serpents on the ground. The altar against which Laocoön leans has also been detached, and forms the composition’s background. And, in direct engagement with the arguments over the sculpture in Rome, Brosamer has bent Laocoön’s arm back just as Michelangelo had first intended. In opposing the sculptor’s revised approval of Sansovino’s restoration, Brosamer challenged the “official” image of the Laocoön and its adjacent culture of superstar artists and faithful mass-market reproduction.

Reproducing a work visible in Rome, Brosamer’s engraving can be aligned with the European tradition of what were known in their Italian center of production as vedute (“views”). Although some artistic licence was allowed, these were primarily intended to show the city as it was seen by visitors. Hieronymus Cock’s 1550 etchings of the Forum of Augustus and Nerva demonstrate how closely vedute could be modeled on the visual reality. Even though he did not know what they were, Cock was eager to show the ruins as they stood in the city. In terms of sculpture, Nicholas Beatrizet’s engraving of the River God Tiber replicates almost exactly the form of the work as it was seen opposite the Laocoön in the Belvedere Courtyard (now in the Musée du Louvre). Brosamer’s composition is clearly based on such an image of the Laocoön. Yet he has used this not as a model, but as an inspiration for his own vision.

With Brosamer having boldly revised the “official” Laocoön, other artists followed suit. In a design eventually printed by Nicolò Boldrini, Titian reimagined the Trojan priest and his sons as apes in a Venetian landscape. Although praised by the seventeenth century biographer Carlo Ridolfi as “un gentil pensiero…” (“a delicate concept…”), the image’s attitude towards the Laocoön is unmistakably satiric. Notably, Titian’s parody—which has been variously interpreted as opposing either the sculpture, its adulation, or its replica by Bartolomeo Bandinelli—does not respect the Sansovino restoration. Like Brosamer, Titian has opposed Raphael’s decision and bent back the priest’s arm. The Laocoön may have been completed and installed at Rome, where Titian likely saw it in 1545-1546. But in Venice, The Laocoön Group as Monkeys targeted an audience open to an alternative vision. 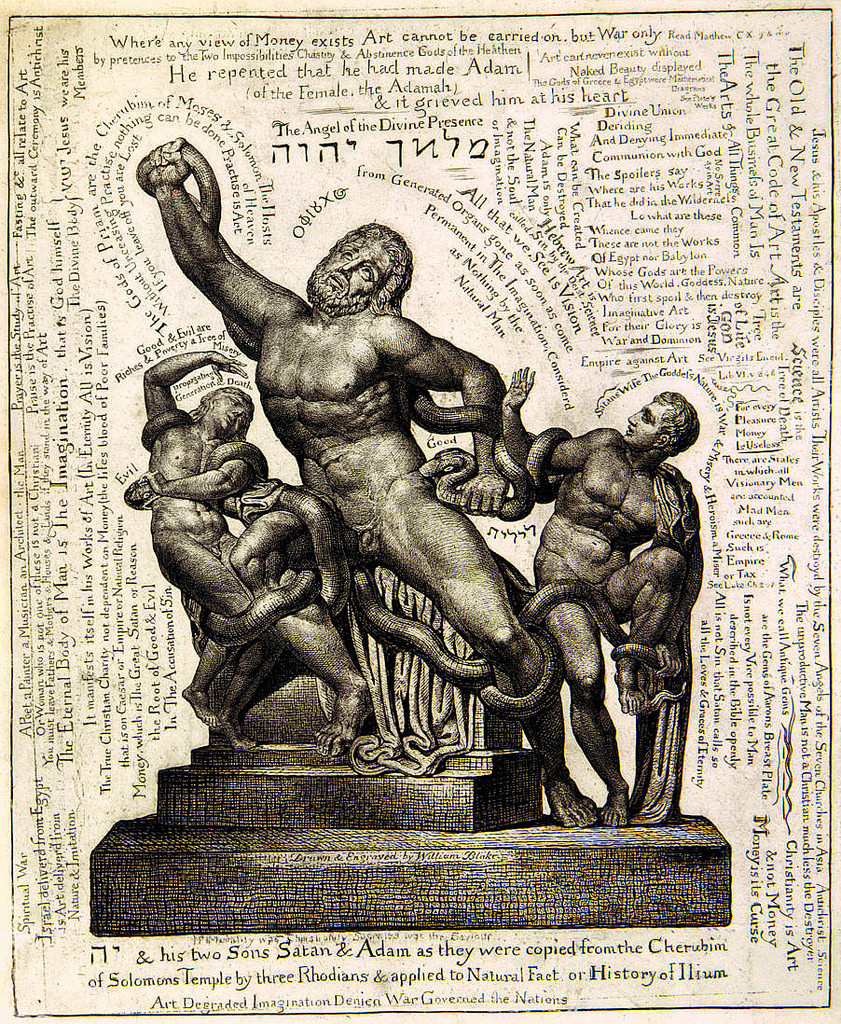 Centuries after Brosamer and Titian’s images, William Blake similarly utilized print media to forward his own opinion of the iconic sculpture. In his 1826 Laocoön, the carefully rendered work is newly identified as a group comprising of Jehovah, Satan, and Adam from Solomon’s Temple. This modern Laocoön exceeds Brosamer and Titian’s revisions, and for the first time, significantly reorients the sculpture’s meaning away from the predominant Greco-Roman tradition. Yet in this audacious reimagining of the Laocoön intellectual institution, the sculpture’s Renaissance form is not altered. Blake has maintained the composition as Sansovino created it, and as he would have known it. To a certain extent, the form of the sculpture has become immaterial. As a simultaneously exalted and questionable masterpiece, subject to both rapturous praise and reappraisal, the Laocoön is for Blake a platform for exploring new concepts. Surrounded by snatches of his theories on culture and society, Blake’s image revives debate over the sculpture’s significance in its contemporary context.

Livia Stoenescu has suggested that Brosamer’s Troia “foster[s] a climate of insubordination…” to the dominance of the Laocoön as a singular representation of the past, and in so doing casts its restorers as “slavish imitators…” of this singular model (Stoenescu, 2015, p. 185). To this can be added a challenge to the Roman artists’ authority to determine what the past looked like. Ignoring the assumed restrictions on his artistic freedom as a maker of vedute, in his version of the Laocoön, Brosamer was amongst the first to assert the validity of his interpretation of antiquity. Laocoön Troia reveals how open visual culture was to interpretation in early modern Europe, even in the period at which its revival was at its highest. When regarded alongside Titian and Blake’s versions, the extent to which artists across Europe engaged in these debates is evident. Antiquity—and its reinterpretation—may have been superficially cloaked in academic learning and deliberation. In reality, it was a lively and fluid debate. If Brosamer had a hand in the actual Laocoön restoration, we would certainly see a very different sculpture in the Belvedere Courtyard today. And with his print, Brosamer has ensured that, in some way, we do.