Ziggy Stardust, Aladdin Sane, the Thin White Duke, The Man Who Fell to Earth, the man of seemingly endless identity changes. David Bowie has been all of these, and more. So an exhibition which purports to tell us about him faces a challenge of monstrous proportions. Does it deliver the goods on this rock god? 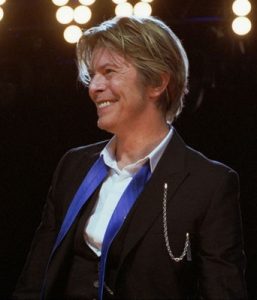 What is on offer here, and how has it been assembled? With the aid of unprecedented access to the David Bowie Archive, Victoria Broakes and Geoffrey Marsh—the V & A’s Theatre and Performance curators—have assembled more than 300 objects that have been brought together for the very ﬁrst time. As we enter the exhibition, we are greeted by the striped bodysuit designed by Kansai Yamamoto for Bowie’s Aladdin Sane tour of 1973, which raises our expectations for a feast of ﬂamboyance to follow. But, to remind us of the world that Bowie (born 1947) grew up in—a world of conservative values on the cusp of social change—we see copies of the novels Absolute Beginners and Lady Chatterley’s Lover and a poster for John Osborne’s play Look Back in Anger.

Then, as if we are in the bedroom of an obsessive yet orderly Bowie fan, we are off on a voyage of exploration around the different aspects of Bowie’s constantly-changing self-presentation, something which is emphasized by the use of the word “is”—with its connotations of living, moving, and having being—in the exhibition’s title. The effect of rooms of costumes, ﬁlm-clips, records, and notes for song lyrics is overwhelming, so let us pinpoint some examples which mark his development. We see photographs of his early musical years in which he seems a pensive, moody Mod but with a hint of expectation, as if he is telling us to keep an eye out for him as better things are coming. And, indeed, a more exotic mode of presentation awaited Bowie. This was the era of alternative performance art, of varied content, and varying competence. Dancer, actor, and mime artist Lindsay Kemp used Bowie’s music in his show, and a photograph shows the performer simpering deceptively. From Kemp, Bowie learnt stagecraft, including the use of costume, lighting, and sets, skills which he would proﬁtably put to use in his own performances. There is a copy of a programme for Bowie’s 1969 Changes tour and an original record of his single ‘Space 0ddity’ from the same year, the track that would bring him his first taste of mainstream success.

Bowie owed his fame, arguably, more to his visual style than his music. His ﬁrst job after leaving school was working in advertising and, while it is easy to snipe at the morals and workings of that profession, it is one that requires mental and visual skills for its practitioners. Bowie built on that early experience, and we see his developing sense of visual importance in a photo taken of him in 1973 by photographer Mick Rock where, even though he is not directly facing the camera, his smile, although meant to be natural-looking, has an element of a pose about it. Bowie was developing in other ways, too. We see a programme for Andy Warhol’s underground play Pork, held at the Roundhouse in 1971 and the members of whose cast—including transgendered singer Wayne (later Jayne) County, and gay actor Tony Zanetta—were befriended by Bowie, giving him the idea for chronicling the lifestyles of people on society’s socio-sexual margins. This is a reminder of the way in which the seventies was a period in which dystopia, violence, and other noir themes were explored in a way that, arguably, would be almost unimaginable today for reasons of social and ﬁnancial risk aversion (would ﬁlms from that decade such as Chinatown, A Clockwork Orange, and The French Connection get the go-ahead today?). Bowie’s continuing attention to appearance and performance are emphasized by a smart black suit designed by Ola Hudson for the character of Thomas Jerome Newton and who was played by Bowie in Nicholas Roeg’s science-ﬁction ﬁlm of 1976, The Man Who Fell to Earth. (This is complemented by a poster for the ﬁlm showing Bowie with a tough yet ethereal look.) We also see Bowie’s Pierrot or ‘Blue Clown’ costume, designed by Natasha Komiloff, for his ‘Ashes to Ashes’ video of 1980 (possibly the best promo video for the then-burgeoning New Romantic movement). We see artwork for the sleeve of Bowie’s 1974 album Diamond Dogs, where Bowie adopts a tough yet effeminate dog-like—or should that be bitch-like?—pose, and a model for a jagged stage set for his Glass Spider tour of 1987.

However, this exhibition raises several questions, the ﬁrst two of which are interrelated and might, in some quarters, be regarded as almost blasphemous to utter: how original is Bowie, and was the Bowie phenomenon of 40 years ago genuinely revelatory? In the seventies, if you considered that rock music had a primarily socio-political function—or if you were gay and ambitious, but lived in atmosphere where disapproval of homosexuality was combined with low expectations of life in general—then you probably did feel that Bowie’s performance style was a visual, and sexual, epiphany (the exhibition features the multi-coloured suit worn by Bowie for his performance of ‘Starman‘ on Top of the Pops in July 1972, an event which manifested his powerful effeminacy in all its glory).

If, however, you were familiar with the camp antics of the Bright Young People of the 1920s—such as Stephen Tennant—or felt that rock’s prime function was to entertain, preferably in as preposterous, over-the-top manner as possible, then you probably did not. Instead, you regarded Bowie’s contribution to it as excellent theatre, with the added value that—if you were so minded—being a fan of it would give you the satisfaction of annoying parents and other authority ﬁgures. Views will—to put it mildly—vary on these issues. But what cannot be doubted is that Bowie’s work did help to set a new benchmark for rock performance which would, in turn, have a societal impact in other ways.

The Gay Liberation movement emerging in America in the early 1970s had a puritanical streak in it which rejected ﬂamboyance (arguably, in the case of gay men, because of sexual guilt, against which the clone cult of hyper masculinity could act as an antidote) and which would spread across the Atlantic, but effeminate gays could ﬁnd a home among Bowie fans and helped to bring out alternative sexualities as a matter for public comment. And he showed that ordinary kids could become art objects. The largely working-class New Romantics who, dumb with mascara and blind with lipstick, would parade a few years later around Soho were indebted to Bowie’s example and inﬂuence. But as they did so—and built their careers in the process—they also promoted gender equality, for New Romanticism was a movement where women took leading roles as designers, musicians, and club ﬁgures. Those career-building boys and girls would also keep alive—and pass-on—the ﬂame of Bowie’s stage presence and style presentation, with stars such as Lady Gaga acting as its current torchbearers.

The exhibition prompts further questions. How many Bowie enthusiasts plan to visit this exhibition (for which 47,000 tickets have been sold so far), not only in recognition of his artistic gifts but also because he represents an era when sexualities which are today considered mainstream were regarded as having a frisson of delightfully dangerous deviancy, and pop/rock music, which is now formulaic—‘I’m living my dream’ has become an almost obligatory phrase within the TV pop talent show liturgy—was considered genuinely rebellious (although it can argued that it lost the r-word when The Beatles were given an award by Harold Wilson as a way for him to cash-in on youth culture)? And is enthusiasm for Bowie a subconscious way of seeking solace through artistic and sexual ﬂamboyance in a time of socio-political insecurity? For during what were arguably Bowie’s golden years, Britain was in the grip of economic, industrial, and racial tensions and uncertainties which seem to resonate today with the credit crunch, mass unemployment, gang violence, concerns (now being taken-up by mainstream politicians) over immigration, with disquiet over Muslim inﬂuence thrown in. It is no surprise to feel that Bowie—via a combination of nostalgia and newness—may be reprising his role in a societal situation which is less than hunky dory.

But back to the exhibition. ‘In a series of photographs at its final section, Bowie is shown in a photo taken for his Pin Ups album by Mick Rock in 1973’. But there is another photograph of Bowie, taken this year by Jimmy King, showing the singer sitting in front of a joint photograph of Bowie and legendary Beat writer William Burroughs. In both pictures Bowie — despite the time lapse — radiates vulnerability and expectation, arguably two basic qualities to be found within any practitioner of the arts. This exhibition is a celebration, not only of Bowie’s magpie mind in spotting artistic and cultural trends, but also of his eagle eye in seeing how to present them in a way that continues to inspire today’s observers of his output to explore fresh cultural paths.

Written with a Creative Commons License, with edits: https://creativecommons.org/licenses/by/1.0/