What a Lack of Sleep Means for You 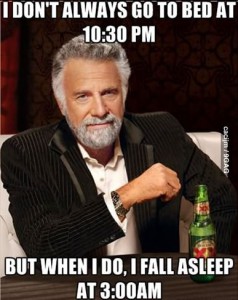 The human body is a mechanism that is perfectly designed. A healthy, properly functioning body is a self-sufficient unit able to effectively deal with all kinds of daily challenges. Our bodies do not require conscious control—many processes, such as digestion, breathing, heartbeat, and so on are automatic. All our bodies requires from us is careful and proper handling; alas, this is where many problems start. Except the obvious misuses, such as consuming fast food, physical inactivity, or bad ecology, there are hidden dangers which we usually do not pay attention to. One of the most dangerous (and the most typical nowadays) among them is the lack of sleep.

Today, it has become almost natural to sleep less. We often believe there is nothing wrong in sacrificing a couple of hours of sleep in favor of other activities, while jobs and other social responsibilities consume plenty of time as well. Besides, many people suffer from various kinds of sleep deprivations, caused by psychological or other reasons. Unfortunately, a lack of sleep is not so harmless. Recent studies proved it significantly increases chances of heart disease; research conducted in 2011 proved people who sleep less than six hours per night are more likely to develop heart disease or die from it (ABC News). Besides this problem, people who sleep less are more prone to high blood pressure, irregular heartbeat, stroke, and diabetes. On the contrary, people who practice healthy nutrition, moderate physical exercises, and sleep seven or more hours per night, lower their risks of getting heart disease by up to 65%.

A lack of sleep can be a reason for accidents as well. For example, one needs to look no further than at the famous disasters in modern history: the 1979 nuclear accident at Three Mile Island, the massive Exxon Valdez oil spill, or the 1986 nuclear meltdown at Chernobyl; this is not to mention car accidents, airplane crashes, and other catastrophes. According to the American National Highway Traffic Safety Administration, the annual amount of car crashes caused by fatigue equals 100,000 (WebMD). Poor sleep also has a negative influence on job performance and safety—workers who have sleep deprivation are more prone to work accidents, and have more sick days per accident.

Perhaps one of the most bizarre effects of total sleep deprivation is its influence on food consumption. According to a study conducted by the journal Obesity, sleep deprivation can decrease higher level thinking and increase the feeling of hunger instead (Medical News Today). The results of the study showed that men tended to buy 18% more food, and consume 9% more calories when they were sleep deprived, compared to those nights when they had sound sleep. In addition, the same study showed that the concentration of the hunger-increasing hormone ghlerin in male bodies increases after a night of poor sleep. Therefore, there may exist a correlation between obesity and the lack of sleep.

In the modern, fast-paced world, the lack of sleep has become almost a norm. However, its negative effects are being strongly underestimated. Among the most common malfunctions caused by sleep deprivations one can name severe heart problems, low concentration, and increased risks of getting into accidents, and its indirect contribution to the development of obesity.