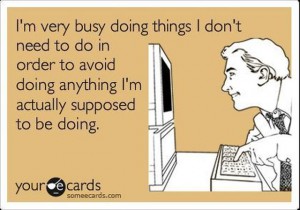 Have you been in a situation when you had a deadline approaching, and there was still a lot of work to do, but instead of doing your best to catch up on time, you watched YouTube clips and browsed random websites? If yes, then you are one of the hundreds of millions procrastinators. This word, procrastination, has become rather popular recently, and people use it eagerly. But is procrastination some sort of modern sickness, or is it trivial laziness?

Professor Clarry Lay, a psychologist writer who researches the issue of procrastination, believes procrastination occurs when there is “a temporal gap between intended behavior and enacted behavior,” which means a significant time period between the moment when a person was intending to do a task and started doing it. So, if instead of doing something you should focus on, you prefer doing something more enjoyable at the moment, then you are procrastinating (MindTools).

Procrastination is not so harmless as it might seem at first glance. The Procrastination Research Group at Carleton University in Canada asked 2700 interviewees to answer the question, “To what extent is procrastination having a negative impact on your happiness?” 46% replied that procrastination affects happiness “quite a bit,” and even “very much,” and 18% of the respondents believed procrastination has an “extreme negative effect” on their lives and happiness. Procrastinators usually estimate time poorly, focus on the past instead of the present, and do not act on their intentions; this is usually connected to low self-esteem, an inability (or unwillingness) to compete with others, perfectionism, self-deception or self-confidence, anxiety, and so on (Success Consciousness).

There are ways, however, to deal with procrastination, or at least to minimize time spent unproductively. A person should be aware of the triggers that make them procrastinate—usually it is a complicated task, or a vast amount of work. Next, procrastinators should consider applying several of the numerous time-management techniques, and find motivation that would encourage them to complete “dangerous” tasks on time. They should constantly be aware of the possibility to roll back to procrastination, and develop techniques that help them complete tasks on time.

Procrastination is not equal to laziness. It is a tendency to postpone doing work or completing important tasks in favor of more pleasant activities. According to studies, procrastination can greatly harm the feeling of happiness of a procrastinator, and is usually connected to perfectionism, low self-esteem, self-deception, and other similar psychological traits. Fortunately, there are ways to deal with procrastination, such as awareness, time management, and motivation.