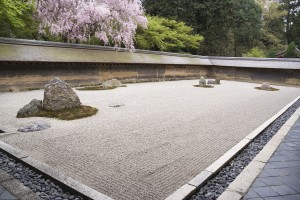 When speaking of Japan, most people imagine a certain set of things: Fujisan (also known as Fujiyama), sushi, geisha, samurai, anime, shinobi (often incorrectly called “ninja”), weird TV shows, crowded megalopolises, Pearl Harbor, a traditional society, and so on. More “advanced” adepts will probably mention Zen Buddhism, koto and shamisen musical instruments, Noh and Kabuki theater, shoguns, and Sengoku-jidai—the period when Japan was torn apart by devastating civil wars. And probably, some of these people will mention one of the true wonders of ancient and modern Japan: Ryoanji, a temple in Kyoto where a famous stone garden is located.

The history of Ryoanji temple is ancient and mysterious. Ryoanji was built on the lands of the Fujiwara clan, famous throughout the 8th-12th centuries. These grounds had been bought in the middle of the 15th century by Hosokawa Katsumoto, the deputy of the shogun and a warlord, who built his mansion (and the temple) there (although there is a theory that the temple had been built about 40 years later by a Zen monk named Souami). During the Onin war, one of the many wars tearing Japan apart during that historical period, the residence had been destroyed, and then rebuilt by Katsumoto’s son, Hosokawa Matsumoto, in 1488. Anyways, after the reconstruction, Ryoanji stood there for almost 300 hundred years, until completely burning down in 1797 and being reconstructed again, supposedly in 1799. Since that time, the temple has not changed much (Real Japanese Gardens).

As for the history of the rock garden of Ryoanji, the facts are less specific, and are surrounded by a number of speculations. One of the assumed designers is the aforementioned monk Souami, who is believed to have made the garden look as we know it today: a rectangular square surrounded with low earthen walls and filled with pebbles, in which five groups of rocks lie. There are in total 15 rocks in the garden, but it is designed in such a way that from whatever point a viewer looks at them, he or she will be able to see only 14 rocks at a time: the 15th rock will always remain concealed from sight. It is unclear what meaning the designer intended to imbue the garden with; supposedly, the rock composition embodies infinity or other abstract concepts like this, but there are no clues regarding the meaning of these rocks, so each viewer has to find this meaning for himself or herself (japan-guide.com).

Before the works of Japanese scholar D.T. Suzuki had become popular in the West, Ryoanji had remained unfamiliar to the public. However, Dr. Suzuki’s numerous works on Zen Buddhism and culture had caused a true explosion of popularity of “everything Zen” in the western world, and Ryoanji has gradually become a symbol of Zen tradition—especially after it was visited by Queen Elizabeth II. (Kinukake.com). Nowadays, Ryoanji is a popular tourist destination not only among Japanese people, but globally, attracting those interested in Zen, wishing to get in touch with an ancient and mysterious culture, or trying to find themselves, their place in the world, and struggling to solve the riddle of Ryoanji’s rocks.