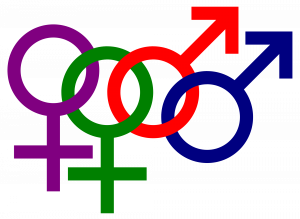 As human beings, we need to categorize and sort all kinds of things out. Thinking and perceiving the world around us is an energy-consuming process for the brain. So, in order to simplify and speed up this task, it came up with a mechanism of stereotyping, creating schematic and generalized beliefs about other people, things, phenomena, etc. In this regard, there is nothing bad in stereotypes. Without it, we would possibly have to rediscover and get ourselves reacquainted with every person we communicate with. Problems begin when stereotyping gains emotional coloring, and becomes a basis for discrimination.

Perhaps, throughout the course of history, there never were debates more significant than those regarding sexuality and sexual orientation–at least, in western civilization. Although in some cultures, such as Ancient Greece or Rome, homosexuality was common, heterosexual relationships remained a standard. Although today there is a popular opinion that homosexuality was widely tolerated in Ancient Greece, in fact there was controversy surrounding it as well. For example, Plato is known to have called homosexuality “utterly unholy, odious to the gods and ugliest of ugly things” (strangely, he was also the one to have said that same-sex love is much more blessed than a regular one–before he changed his mind). Ancient Greeks had special slaves called “pedagogues,” whose direct duties were to protect boys–and by boys Greeks meant males up to 18 years–from sexual harassment from other men (The Guardian).

When Christianity became the dominant political and religious force in Europe, homosexuality became taboo. It was considered a sin, a perversion–so those caught practicing same-sex love could end up doing penance, or worse. Strangely, medieval society in general and the church in particular seemed to have tolerated female homosexuality better than the male one. If a woman was caught having sex with another woman, she would most likely be condemned to three years of penance–in contrast to 10 years for the same “sin” committed by a man (Medievalists). This is not to mention that in some cases men could be executed for expressing and/or practicing homosexuality. Women, on the other side, had more chances to be accused of witchery, and end up burning in a pyre.

Epochs changed, outlooks and paradigms shifted, but homosexuality still remained something not spoken about freely–especially in societies where religious doctrines were still strong. But in general, there was a tendency for a more mild and tolerate attitude towards homosexuals. In Victorian England, for example, gay men were treated rather liberally–if only you can call a lesser amount of criminal prosecutions for consensual homosexual sex a “tolerant attitude.” Indeed, compared to other times, Victorian England was more gay-friendly. The case of Oscar Wilde, published novels such as “Maurice” by E.M. Forster, and other examples show that homosexuality slowly began coming out of the closet, so to say (History Extra).

The true breakthrough occurred in the 20th century when Alfred Kinsey conducted his famous research on sexual behavior among humans. After years of observations, he came to the conclusion that sexuality and sexual orientation is not something that is 100% solid. Instead of the popular (even nowadays, unfortunately) dichotomy “heterosexual–homosexual,” Kinsey suggested that sexual orientation is more of a scale with the two aforementioned poles, and a broad range of sexual tastes and preferences between them. In other words, cases of absolute homosexuality or heterosexuality are rare: almost every person is somewhere in the middle of Kinsey’s scale, meaning that bisexuality can be considered a common sexual orientation among human beings (Bustle).

Even today, there is a lot of controversy regarding homosexuality. Humanity has walked a long way from acceptance, through complete denial and taboo, towards today’s more-or-less tolerant attitude. Research such as Alfred Kinsey’s prove that with such a complex matter as human sexuality, there can be no single-valued, simple answers. This means that all the stereotypes we currently have about sexual orientation should be reassessed.

Davidson, James. “Why Were the Ancient Greeks so Confused about Homosexuality, Asks James Davidson.” The Guardian, Guardian News and Media, 10 Nov. 2007, www.theguardian.com/books/2007/nov/10/history.society.

“How Far Did Medieval Society Recognise Lesbianism in This Period?” Medievalists.net, 16 Feb. 2014, www.medievalists.net/2014/02/gender-sexuality-europe-1200-1500-far-medieval-society-recognise-lesbianism-period/.