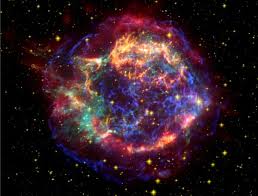 Humanity has been amazed by stars for centuries. In the age of ancient myths and legends, in the times when sailors used constellations to navigate in oceans, and until now, stars have remained one of the biggest mysteries people have ever encountered. Nowadays, scientists can figure out not only the distance between a certain star and Earth, but also the star’s composition, mass, age, and many other parameters. Technological progress allows us to understand the universe much deeper than it was possible for scientists in the past. One of the phenomenon that modern science managed to explain is the explosion of stars, or supernovae.

In 1604, Johannes Kepler discovered the last observed supernova in the Milky Way. Being a brilliant scientist, it is still unlikely he could comprehend or explain the phenomena he observed and described. A more recent supernovae explosion that occurred in our galaxy took place about one hundred years ago; it was discovered by the NASA Chandra telescope (NASA). Years of observations prove that supernovae occur not just in the Milky Way, but around the whole observable Universe. Such explosions are not unique or rare—on average, they occur once in 50 years; however, each of these explosions provide scientists with valuable data, enabling them to understand the Universe better (Space.com).

But not every star star becomes a supernovae. For many of them, it is typical to cool down and turn into white dwarfs. However, in some cases, stars “refuse” to simply fade away. Some of them accumulate matter from neighboring stars until a runaway nuclear reaction ignites (type one supernova); others run out of their fuel—the thermonuclear reaction inside such stars slows down, and the star collapses under its own gravity (type two supernova). In the second case, as a result of an explosion, a neutron star may later form; however, scientists believe that in case of the collapsing star being massive enough (around 30 masses of our sun), it may turn into a black hole instead (Space.com).

When a star explodes, it emits matter into surrounding space at the speed of about 25,000 miles per second. Among these emissions is iron—one of the key elements of which our planet and we ourselves consist of. Moreover, supernovas (and them only) are a source of all known heavy elements in the Universe; this fact makes it possible to say that all of us consist of ancient star matter (National Geographic). Moreover, these very elements travel across the Universe to form new stars, planets, and other objects. Due to supernovae, scientists have discovered that our Universe is constantly expanding, and supposedly it is not the last surprise that studying these huge cosmic explosions can bring to us.

A supernova is a star explosion. When a star becomes old, it either collapses under its own mass, or accumulates matter from nearby stars, and in both variants, an explosion occurs. During the explosion, they jettison a vast amount of matter into the surrounding space; this is the matter of which all objects—including human beings—in the Universe consist of.