To understand which problems worry first world countries the most today, it is usually enough to check the headlines in major newspapers. Although mass media tends to pay a lot of attention to one problem while completely ignoring others, still referring to them is a sound way to learn about major social, political, and cultural issues. Today, along with news about diplomatic scandals, wars, epidemics, and economic crises, headlines are often dedicated to teen pregnancy, which is a real scourge of modern American society.

By teen pregnancy, experts usually understand it to be pregnancy among young women between the ages of 15 and 17 years. In 2013, on average, 13 teens out of 1,000 peers were pregnant. According to recent studies, teen pregnancies have declined in the United States, but the teenage representatives of some social and/or ethnic groups seem to be in the risk zone; for example, African-American and Hispanic teens in the U.S. are two to three times more likely to become pregnant than Caucasian teens. Moreover, it is reported that nearly one in five teen births is a repeat birth, which means that pregnancy for these teens is not a first time occurrence (HealthCommunities.com).

But what risks do teenage to-be mothers face? In fact, being a teenage mother is truly difficult, even compared to regular pregnancy. For example, teens are at a high risk of not getting appropriate prenatal care, as they are often afraid to tell their parents about their pregnancies, and cannot afford prenatal care themselves. Pregnant teens often get high blood pressure, or pregnancy-induced hypertension, as well as preeclampsia much more often than pregnant women who are in their 20s or 30s. Teens are also more likely to give birth to premature babies, meaning that the pregnancies do not last for the regular 40 weeks; also, teenage mothers are exposed to higher risks of having low-birth-weight babies (usually 1,500 to 2,500 grams, and sometimes even less). A very-low-birth-weight baby weighs less than 3.3 pounds. Among other risk factors for teen mothers are STDs (Sexually Transmitted Diseases), postpartum depression, and so on (WebMD). 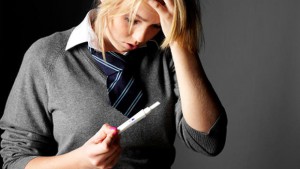 Teenage pregnancy is a complicated modern phenomenon that requires the attention of governmental and non-governmental organizations, psychologists, and first of all, parents. Although the tendency of teenage pregnancy in the U.S. seems to be gradually decreasing, certain ethnic and/or social groups still remain vulnerable to this phenomenon. Becoming pregnant as a teenager leads to a number of health problems (such as preeclampsia, high blood pressure, STDs, depression, and so on), as well as to social consequences, such as divorce, a low quality of life, child abuse, and so on.