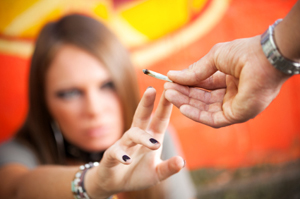 Many adults today refer to adolescence as a wonderful time, which was—even despite of its limitations—supposedly one of the best periods in their lives. Being a teenager is indeed great: you are young, a long life is ahead of you, and the world is waiting for you. However, sometimes parents face a problem: instead of enjoying youth and healthiness, their teenage son or daughter one day comes home high on pot (or something worse). If it happens once, it might be alright—teenagers often seek new experiences, and this particular case might be a mistake your teen will never repeat again. However, if a teenager is abusing substances regularly, there might be something wrong going on in his/her life.

Adolescence is the time when both young men and women seek to fit in their community, find their place in it, and be accepted. Already not a child, but still not a grown-up, a teenager looks to be treated as an adult. Without yet realizing that adulthood is about responsibility, decision making, and self-sustainability, teenagers often stick to what they believe are exterior attributions of being a grown-up: drinking alcohol, smoking cigarettes, and drug use. Doing this, they get into illusions, believing they are mature. Unless something bad happens to them (in the best case scenario is arrest, and in the worst case, drug addiction and rehab) they believe “bad things” happen only to other people. So, their survival instinct malfunctions, and as a result, they throw themselves into dangerous experiments with substances. Also, those teenagers who grow up with parents abusing alcohol or drugs often follow their examples: either subconsciously, or naively considering that if parents do it, then they also should (Promises.com).

As it has been said, teenagers often seek for acceptance. But compared with the acceptance by a society in general, even more important for teenagers is the acceptance of their peers. Adolescents want to fit in groups that they consider to be authoritative. Being “the only one not participating”—be it drug use, shoplifting, or other dangerous but “cool” activities—means being left out, which leads to disrespect and ostracism. In order to comply with the requirements of their surroundings, teenagers may make bad decisions, like taking drugs, to cover-up their insecurities. Thinking about the consequences is not typical for adolescents, so teenagers do not care how drug use will turn out for them or their families. Besides, teenagers want to rebel. It is a paradox, but adolescence is all about paradoxes: they want acceptance from a particular society, and they want to rebel against it. Drugs are one of the easiest ways to seem like an outlaw, to manifest neglect of social rules and norms, and so on. What teens do not realize is that drugs do not make them independent—on the contrary, doing drugs leads to addiction (Dublin City Schools).

Stress, boredom, and self-medication are also the reasons why many teenagers start taking drugs regularly, or at least from time to time. Adolescence is full of stresses; although adults often think it is not, as if they forgot themselves being this age. When teens feel unhappy and cannot find a healthy outlet for their excessive energy, they tend to find dangerous ways of releasing their frustration. The often rough teenage years can take an emotional toll on children, sometimes even causing depression. This is why for so many teenagers, it is hard to refuse trying out marijuana or other drugs—they seek a way to get rid of negative emotions. Unfortunately, this only makes their situation worse (DrugFree.org).

Although adults often explain teenagers’ substance abuse in a simplified manner, like “It’s just a period,” the actual reasons for drug use by teens are usually more complicated. Craving for acceptance by their given society and especially peers, a desire to rebel and manifest aggression against accepted rules, bad examples given by parents, stress, depression, or boredom, a fear to be left out—these are just some of the reasons causing teenagers to try their first harmful substance. Thus, these wishes and motives should be paid attention to.